I was flipping through my binders last night, trying to find a sheet that had a bit of an eye-catch to it. After the simplicity of the Enshrined product, I wanted a little more excitement to the card.

Here's what I came up with. 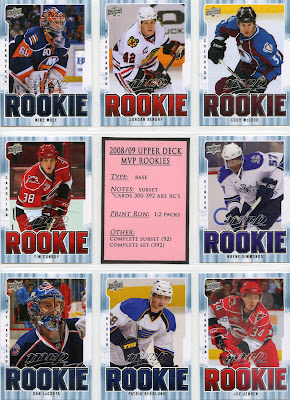 2008/09 Upper Deck
MVP Rookies
This 92-card subset to the MVP product definitely delivers in 'loudness'. The first time I saw these cards, I was immediately reminded that these are ROOKIE cards.

I've always remembered MVP as being a more subtle and simple product.

MVP went with a more bold approach in design and text. While it does give it a 'stop-and-look' effect, it can also come across as a product geared towards a younger collector. 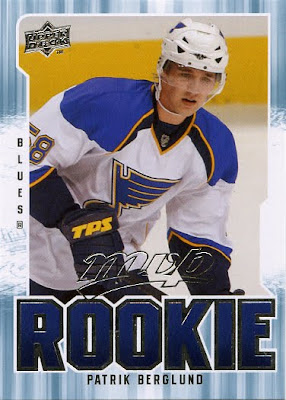 Obviously, the first thing you see when looking at this card is the 'Rookie' text at the bottom. It takes up a lot of space, but allows for a decent amount of photo still. The font style is pretty bold and simple and the matching of color to the team palette is a nice touch.

The photo is encased in a moderately thick white border - again a little more bold than most releases. It offsets the background texture nicely (which is a consistent blue gradient line effect with what looks like the middle section erased).

The team name is along the left side (nicely fitting in the white space for easy reading) and the player name sits along the bottom. Simple but consistent text font is again used.

Within the photo sits the Upper Deck logo (in silver foil) in the top left corner and the MVP logo (again in silver foil) just above the 'Rookie' text. I'm on the fence with what they did to the MVP logo. It's somewhat unobtrusive, but looks a little messy as well. Something a tad smaller and more in the corner of the photo might have been better.

The photo itself is ok at best. Nothing too spectacular with action. And the quality of the pictures is a little bland. Some even slightly out of focus.

Not enough 'dynamic' shots for such a bold card. 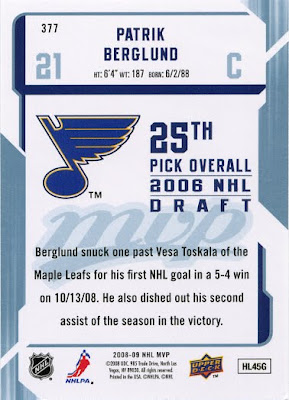 The back of the card continues with the 'loud' theme.

The team logo screams off the card along with the text to the right of it indicating when the player was drafted. While it's consistent with the front of the card, it's a little much for my taste.

That said, I think it lacks information. Give me more than just his height, weight and when he was born. It seems sparse.

A tidbit about the player appears under the team logo. Tidbits are nice, but when all you have are tidbits.....not so much.

All of the text is framed nicely in the 'file-tabbed' shaped rectangle. It fits in with the front of the card and is maybe a little more striking since there is a ton of white.

It doesn't show as nicely with the blue, but the team color is incorporated in the border as well as the bold text of the player name and draft info. Points for that.

A ton of white because there's no information. More beef, less bun please.

The MVP logo sits in the background and is a little more bold than on the front of the card.

The bottom logos and text isn't too bad.....I've seen worse. But I can't understand why there isn't just a little more in terms of statistics. Give me his final year in junior....something - anything.

Overall, the card design has some hits and some misses. I can appreciate the attempt, but I think some slight refining would have launched this card to the next level.

As for the checklist of players, Steven Stamkos is definitely the number one guy on the list. Followed by Drew Doughty, James Neal and then it drops off after that.

With it being slapped with the MVP label, these cards sit on the lower end of rookie cards. A nice option if you want an inexpensive RC of one of the top players. A quick ebay search shows the Stamkos being had for $5-10. Not bad.

Not the worst set I've ever seen, but not the best.

Definitely one you won't miss when looking for it.