With three different hockey pools upcoming this week, I've been swamped with projection guides and internet research. It's been crazy trying to come up not only the 'must haves' but also the 'sleepers'.

One thing I did conclude.....take heads over tails - EVERY TIME. :)

I can't say that this has been the reason for not posting over the weekend, I've just been busy.

Friday was again a stellar mailday with two packages arriving. One had yet another Decades jersey show card 1/1 (the ten billionth one in existence). Worthy of its own post if it wasn't for the fact that I'm almost getting bored with scanning them in.

But the other envelope had something that I've been waiting over 10 years for. 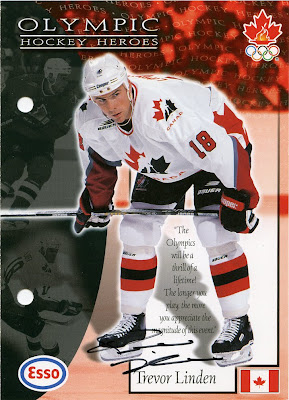 1997/98 Esso
Olympic Hockey Heroes
#A-8 Autograph (500 sets)
About a year and a half ago I blogged about the French version of this card. At the time I mentioned that finding one of them was like a needle in a haystack.

Well, this is the first English version I have seen on the market and I wanted to make sure I gave myself a more than fair shot at getting it.

But first, you may ask "How can you tell this isn't just a regular card that's been signed in person?"

I asked the seller the same thing. Well, actually I just asked for a scan of the back of the card. 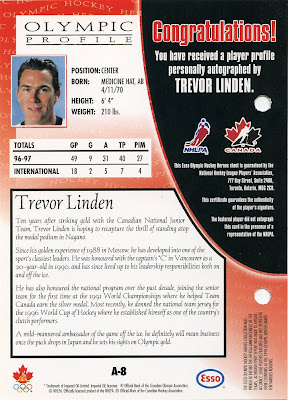 I offered what I felt was more than a fair price (basically what I paid for the French version) and mentioned that I would really like to work with the seller to make this transaction happen.

He said he had a couple other offers to consider. I'll admit I got a little worried. He got back to me a couple of days later and said the card was mine.

When it arrived, I couldn't wait to tear into it. And I needed to - literally. The packaging was so thourough, it took me about 10 minutes to finally get to the card.

I think I need to do a post on what I consider the proper way to package a card.

Nonetheless, a fantastic way to start the fall hockey season.