TO THE BIKE SPOKES!!! - Dominic Roussel

Well, tonight was the second hockey draft in two nights for me. To summarize how I feel about my picks, I will show you this card. 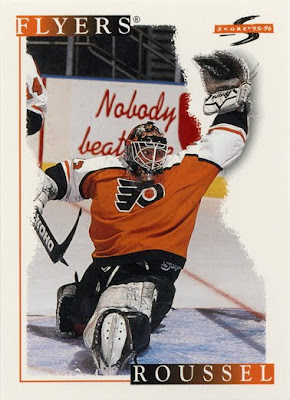 1995/96 Score
#182 Dominic Roussel
Now, at first this card might look like it belongs in the "Cardboard Photography" section. After all, it's a cool glove hand flash.

But take a close look at what's in his glove.

And take a look at his face. 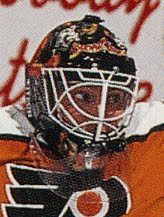 His eyes are looking behind him...directly into the net.

Yup, it was a 'swing-and-a-miss' for me when it came to my hockey pool selections.

I won't bore you with all of my picks. Instead, I will let you cringe at some of the names that came out of my mouth.

Martin Brodeur (not so bad.....if it wasn't for the fact that Cam Ward was still available).

Sheldon Souray (is he still playing? I hope so).

Jaromir Jagr (let's just say that the groans were mighty - throughout the room).

Ville Leino (not in a million years did I expect to pick him).

Travis Zajac (um yeah, he's out for a couple months....nice job in your research).

Steve Mason (the goalies went quick and he was the best of the leftovers...unless you want to count backups. I should have considered one of them).

Anze Kopitar (not necessarily a bad pick, but when your top two guys are Kopitar and Mike Richards....you're hoping that the Kings have a huge season). 'One' and 'two' they are not in my books.

Needless to say, I am sitting here looking at my picks with palm clearly in face. Let's hope for a crazy season.

So with that, Dominic Roussel, and your lack of keeping your eye on the puck.....