One of the nice things about not working this week is that I get to check the mailbox right when the letter carrier arrives.

Today, I saw two bubble envelopes peeking out of the slot. It's like Christmas has come early.

I have a few items en route and am hopeful they arrive before the Christmas smash. If they don't show up in the next day or two, things are bound to get ugly.

I was really excited to see this first card in the mail. It's one that has been on the radar for most of the year. 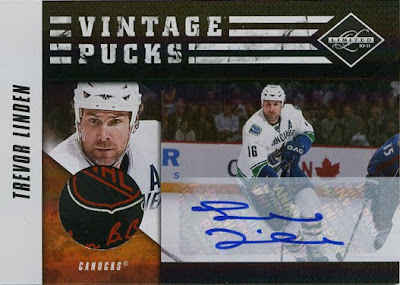 2010/11 Panini Limited
#10 Vintage Pucks Signatures /10
A really tough parallel to track down (without breaking the bank). This card popped up a couple times last year when it was first released. I passed on them as I didn't want to dish out that much cash on one.

Fast forward a year later and I started to wonder if I'd see another copy at a reasonable price again. Remember, once one gets scooped up into a Linden pc, that's one less card out on the market.

I'm guessing there are about 5 copies left to find a home in a collection.

This one comes from a fellow Linden collector who happened to have an extra. He's the one who I purchased the Made To Order card for. We finally got around to finalizing a trade and the packages were delivered in time for the holidays.

Sadly, there was a bump in the road with the MTO I purchased. It took a few extra weeks to get the card re-sealed. I also think we both were a little on the lazy side getting this deal done.

After all, neither one of us is in a rush.

But seeing this card arrive really makes me happy that I'm able to cross it off the list. Some of these low numbered parallels are stubborn finds. 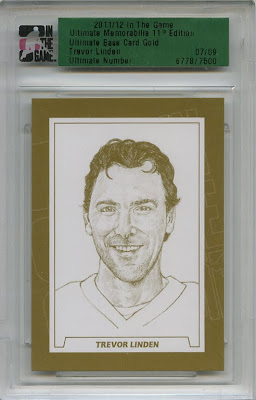 2011/12 In The Game
Ultimate Memorabilia 11th Edition
Base Gold /9
Speaking of... this card is a deceptive one. I've opened 9 packs of the product and have landed 3 base gold parallels. I figured they would be a little easier to find.

Not so. Numbered to just 9, this Linden is the first copy I've even seen. I was able to trade a couple of base cards for the gold and was thrilled to add this one to the collection.

Funny thing is, other than the Hot Patch card /9 (and the numerous 1/1 parallels), all that's left for me to track down from this monstrous product is the base card /63. The easiest (and what should be cheapest) card in the lot to track down.

I'm a patient guy though.
Posted by bamlinden at 8:11 AM