I thought I'd try something new after coming across a couple of interesting cards over the past week.

Have you looked at, glanced at or read a piece of cardboard and gone "Huh....I didn't know that"?

When you take a closer look at some of the names, teams, stats and bios of the thousands of players that have laced up the skates, you quickly realize that there are a number of interesting stories, moments and coincidences.

Hopefully in these upcoming posts I'll be able to share some new information for you (some of which may or may not be....well, interesting).

Let's give it a shot. 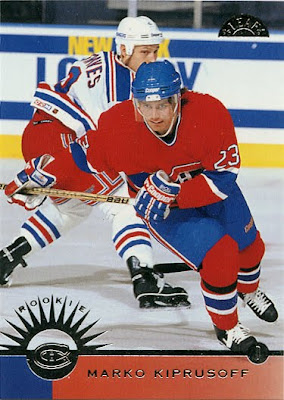 DID YOU KNOW: Vezina winning goalie Miikka Kiprusoff of the Calgary Flames was not the first from his family to play in the NHL. That distinction goes to older brother Marko.

Marko was drafted in the 3rd round (70th overall) of the 1994 Entry Draft. He had built a pretty solid career in Europe before trying his hand in the NHL. But his game didn't transfer well over in North America.

He played in only 24 games for the Habs in 1995, tallying 4 assists before making his way back home to Finland.

He was a mainstay on the Finnish National team for most of the 90's (playing in almost 200 National Team games) and was a part of the Finnish team that won that country's first World Championship gold medal in 1995.

He returned for a second stint in the NHL during the 2001/02 season, playing 27 games for the New York Islanders. He registered 6 assists that year to give him a grand total of 10 career NHL assists.

Younger brother Miikka entered the 2011/12 season just one assist behind with 9.