BEHIND THE MASK - A Bunch Of Randoms

Cleaning off the desk this weekend. No, it's not that big of a task. But I thought I'd share some of the cards I've picked up at shows, received in the mail and worked out through trades.

This batch is goalie themed. The masked variety. 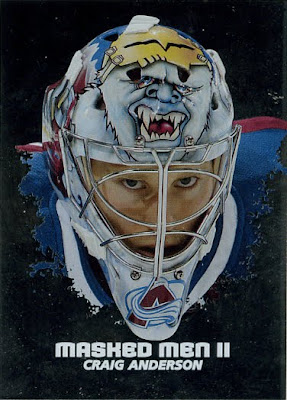 2009/12 In The Game
Between The Pipes
Masked Men II
#MM-41 Craig Anderson
This card is a great example of taking your time when building a set. With this card off the list, I now have one left to finish it.

Could I have gobbled up cards for a couple weeks after the product was released 3 years ago? Sure. But I've been able to build this set through trades and purchases that has saved me a lot of coin.

Coin that I then spend on Trevor Linden cards. Or unwanted wax (still not over that one).

If you look closely at the crown of Anderson's mask, you can see the snowman wearing a 'vintage' mask of his own. Anyone know what that mask represents? 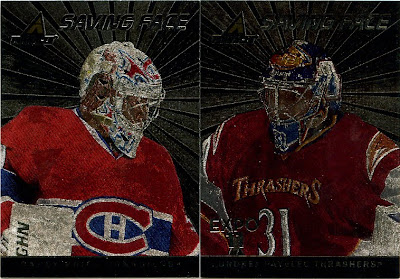 2010/11 Panini
Pinnacle
Saving Face
#11 Carey Price #2 Ondrej Pavelec (promo)
I'm also building this 'mask' set from Pinnacle. I give it the quotes because it's medium shots of the goalies, and because of the shiny card front, you can't really make out any of the detail on the masks.

These cards scan so poorly that when I inquired about these two, I didn't notice the 'EXPO 11' on the Pavelec.

That one's going in the trade box. D'oh! 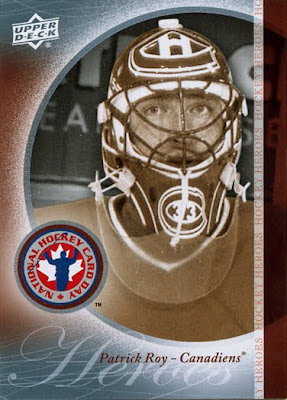 I wish it were in color. 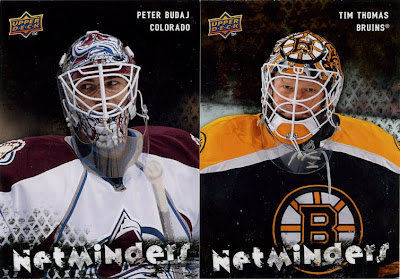 2009/10 Upper Deck
UD Series I
Netminders
#NET20 Peter Budaj #NET29 Tim Thomas
Here's a set I never really started. I guess I never found too many of the cards dirt cheap (it's one of those kind of sets in my eyes).

Plus, once again, the photos are a little too wide. Either make it a 'mask' set or get the camera out of there.

I like the Thomas card in his old mask. It's a solid reminder of how much I enjoy his new lid. 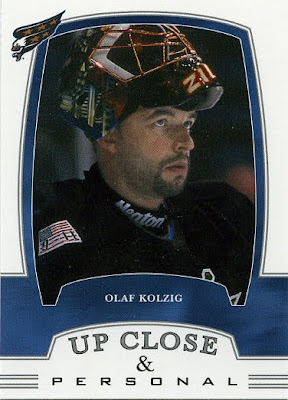 2002/03 In The Game
Be A Player First Edition
Up Close & Personal
#336 Olaf Kolzig
Is this really a mask card? No. But I tend to get sucked in to cards that are closeups with a mask in the shot.

Sue me. It was cheap. 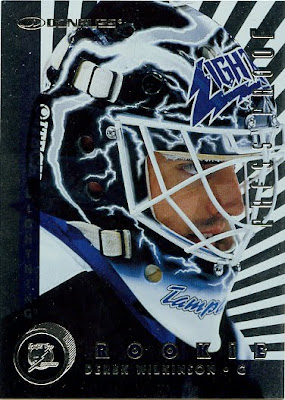 1997/98 Donruss
Press Proof Silver
#213 Derek Wilkinson
I grabbed the gold version of this card for my 'One Sheet, One Set' project (when I picked up a ton of inserts...cheap).

I liked the Wilkinson card so much, I picked up this silver version for my mask pc.

I like to pick up regular base cards, inserts, whatever...as long as it is a nice closeup of a goalie mask.

One day I'll scan more of them. And then put them in a binder.

Now, back to my desk. After all, it's now Saturday morning.
Posted by bamlinden at 12:20 AM