Lately, I've been showing off some tougher-to-find, low-numbered Linden cards in these posts. I can't help but be excited when I find these little nuggets of gold.

But after seeing this gem waved in front of my face at Traders Night, I knew it was going to be my next show and tell card.

Rare. It's a subjective word. There are a lot of variables involved in describing what rare is. Location, accessibility, awareness, perception.

It can also be black and white. If there's only one in existence.....it must be rare.

Oddly, even 1/1's can feel 'less rare'. The over-saturation of 1/1 cards and printing plates these days has dulled the enthusiasm of these ultimate pulls.

But I digress. Let me take you back to a day when 'rare' had a little different taste to it.

Up until the late 1980's, serial numbering on hockey cards didn't exist. For that matter, 'tough to find' parallels weren't part of our checklists either.

In 1990 though, Bowman and Topps issued 'Tiffany' parallels. Glossy cards that looked identical to their cheaper cardboard cousins (and were limited to 3000.....but not serial numbered).

1991 would introduce the first truly serial numbered card (for my Linden collection at least)... 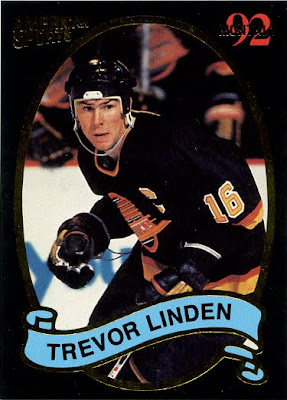 Just a quick aside. This photo of Trev perfectly captures the early days of Linden's career in my eyes. Babyfaced, intense and wearing that instantly recognizable Cooper helmet. Love it.

But it's the back of this card that tells the real story. 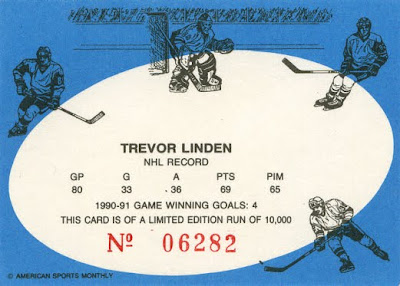 Today, that's laughable. Loudly laughable. But back in 1991 it was something that made me scramble.

There's not an infinite number of them (like every other card ever in existence prior to this - right?) and there must be at least another 9,999 people who wanted this card. So I better jump at it while I have the chance.

Add to that the fact the card wasn't in a normal product release. It was a magazine insert card. Geez, there must be a few thousand of these magazines that will never sell. I gotta get one now - fast.

Fast forward to today where a serial numbered card out of 10,000 would get you banished from the sportscard community. No longer rare. Not even close.

But when I saw this pick a couple days ago, I relived all those moments. A quick chat with Brian (Captain Canuck), who kindly gave me the card, had us reminiscing about what was rare, and how a numbered card (even out of 10,000) was something new, something different.

Thanks for the trip down memory lane Brian.
Posted by bamlinden at 9:35 PM