I was sifting through the goalie mask photos I've compiled over the years, looking for something different to show off.

So when I came across this Fred Brathwaite pic, I thought it would make for a good 'Rate My Mask' post as well as a chance to give my two cents on him. 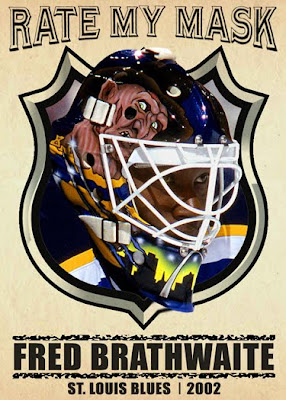 First, the mask. This lid is 10 years old and it shows clearly how mask design and airbrushing have advanced today. It's a nice lid, but I can only imagine what it would look like if it were done with today's tools and talents.

Not sure what the connection to Freddy Kruger (or Nightmare on Elm Street) Brathwaite has......other than his name - Fred (Freddy), so I'll go with that.

The St. Louis skyline is silhouetted along the chin with the Gateway Arch prominent in the foreground.

The colors (while consistent with St. Louis colors) are a little bland and it's tough to make out any sort of impressiveness from a distance. 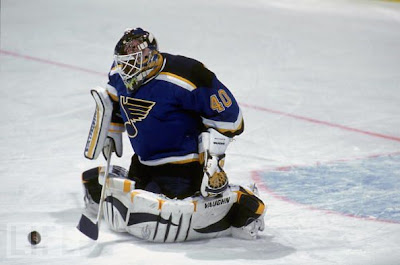 Nothing special and it makes me wonder who had the vision for the design - Fred or the mask maker.

Now on to Fred Brathwaite, the goalie.

In his entire NHL run, I never got the sense that he was given the football completely to run with. There was always a pretty short leash on his performance.

If he was performing well, it was like waiting on pins and needles for him to fail. And when he did - he was out. Teams were always looking at what was next, what was after Brathwaite as opposed to embracing what was a pretty decent goalie.

Without question he was a fan favorite. He seemed like a very popular person and always had a positive demeanor. When he was playing with the Flames (from 1998 to 2001) he bailed them out numerous times.

And even though the Flames had a huge revolving door of goalies (due to injuries), it took a long while for Freddie to be given a fair chance at the number one role.

And even then, it was taken away from him before he had the chance to embrace it and make it his.

His numbers (81 career NHL victories) don't give him the status he deserves. He was a better goalie than the journeyman tender he's been dubbed as.

He's still playing in Germany....and still putting up some decent numbers. I'm curious to see if he finds his way back into the NHL in some sort of coaching capacity after his career comes to an end.

So now it's your turn to Rate My Mask!
Posted by bamlinden at 8:17 PM