OPINION: MY GUY GOT TRADED.....ONCE

Trade deadline has come and gone and for most of us - it was a snoozefest.

Don't tell that to the Cody Hodgson collectors out there though. From a hobby sense, Monday was a life-altering day.

How do I know? I've had the same thing happen to me.

It was February 6, 1998, the day before the start of the Nagano Olympics. Trevor was ready to compete with Team Canada in what I would only think to be one of the pinnacle moments in his career.

He was dealt for Todd Bertuzzi, Bryan McCabe, and the Islanders' third round draft pick (Jarkko Ruutu). Just like that....his days as a Canuck were over (temporarily at least).

Part of me was stunned. My guy was being traded from my team. I've never dealt with this sort of thing before. And now I'm supposed to cheer for the Islanders? They're not even on TV here in Canada. In fact, the only time I got to see him play was in person - New York came to town to face the Flames and I picked up some cheap tickets to the matchup.

From all to nothing, I was pretty bummed. If there was a silver lining to the cloud however, it would be that he was out of the Keenan/Messier shadow. For a few months leading up to the trade, Trev was 'in the doghouse'. Unfairly I felt too. The Keenan era in Vancouver just destroyed the kind of player Linden was (and he never really fully regained that). 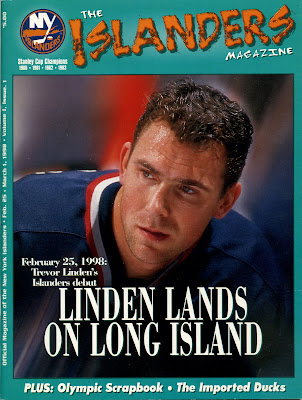 After the Olympics ended and Trevor donned the Fisherman logo jersey, I quickly realized that it was the name on the back that meant more to me than the crest on the front of the jersey.

I was a Linden fan. And that trumped everything.


It's still odd seeing that footage.

Did I enjoy watching him play in New York, Montreal and Washington? I guess it was better than nothing. I was thrilled to see him return to Vancouver, but my loyalty to the Canucks has never been the same (even to this day).

I've heard a number of Cody Hodgson collectors talk about possibly trading away their pc or no longer collecting his stuff. Some will continue on with Cody and start picking up his Sabres cards. Whatever the decision might be, it's the individual's choice.

My only suggestion....don't rush into anything. Don't have that fire sale quite yet. Don't make a snap decision. Give it a few days, maybe even a few months. If you still feel passionately about it, go with it.

I have no doubt that if I abandoned my Linden collection after Trevor was traded in '98, I'd be regretting it to this day.

Anyone else out there lose their favorite player to another team? How did your player collection change (or did it at all)?
Posted by bamlinden at 10:37 PM