SCRIBBLES & SCRIBES - My Name Is TJ

When things 'show up', they tend to do so in bunches. After a huge drought in finding some current players in the NHL with nice signatures, I've noticed a good half dozen or so in the last month.

That makes these 'Scribble & Scribe' posts pop up a little more often.

When I found the 'Scribe' that I'm using in this matchup, I knew who I wanted to put him up against. I had just never seen his signature before.

A quick search on ebay though left me perfectly content. He's definitely got a 'Scribble'. 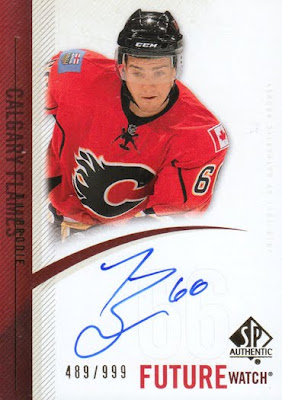 TJ Brodie
SCRIBBLE
TJ Brodie....or as I like to call him "7366". Simple does not always equal good.

What I found interesting (and even a little cocky) is that Brodie donned the number 66 to start his NHL career (you can see it even clearer on his Upper Deck Young Guns RC).

Fortunately, TJ got the memo and is now wearing the number 7. That would now make his name "737". I like that. It's his new nickname from now on. 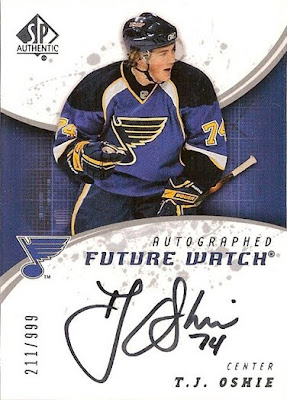 TJ Oshie
SCRIBE
Oshie is riding a fine line, but his auto sits in the nice pile on my desk right now.

I like that there's more than just a few abbreviated letters and a number. This autograph has the look of a full name. As well, the use of space with his capital letters and lower case really merge well. Distinct and with purpose. You can say that about anyone with a strong signature.

And the other thing I like is that it's not written all over the card. I appreciate the players who take the time (and understand the concept) of writing along an imaginary straight line.