This was I snagged for a great price and couldn't resist picking it up. 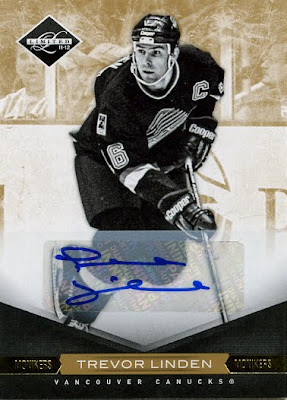 2011/12 Panini Limited Monikers Gold # 5 (Vancouver) /19
The two versions of base cards in this set turned me off of Limited quite a bit. I really haven't been pursuing the cards very much.

But when a card numbered to 19 pops up at a decent price, I gotta go for it.

Did Panini run out of round numbers? 25 was too many?

Regardless, when I opened the bubble envelope and saw the card, I was happy to have it, but not excited to receive it.

The plethora of parallels in products these days is starting to leave me a little bored with the cards that paralleled.

Other than the gold coloring and sticker autograph (and the serial numbering to 19 on the back), this card is no different from it's base card counterpart.

It's nothing new and I shouldn't be shocked by it. But I've picked up a lot of parallels over the past couple years.

It's gotten a tad bit boring.

Add to that, the card is a little less than what I was expecting in terms of condition. The sticker is ever so slightly peeling off in the upper right and there are some very minor scratches on the back. Nothing worth making a stink about (other than on my blog).

That said, I am excited about some of the products hitting the shelves over the next few weeks.

In The Game Heroes & Prospects has a couple of 'Hero' jersey cards in the mix. That's right....just 2 cards from that set to pick up.

UD's World of Sport has included Linden (apparently in his Team Canada garb). Very excited to see that.

ITG is also coming out with a new product called 'Captains'. That could get a little ugly, but I'm excited to see some of the innovations in that release.

Panini's Crown Royale (although not new) is refreshing for me in that there are only 3 Trevor Linden cards. A base card, an Ice Kings insert (which will not break the bank) and an Ice Kings auto parallel /99.

I must say that I'm very relieved with the very attainable and realistic insertion numbers of some of the Linden cards to come.

It makes my wallet happier and my 'hunting & gathering' more enjoyable.
Posted by bamlinden at 8:34 PM