LINDEN CARD OF THE WEEK - A Very Special Addition

With the numerous show & tell posts showcasing (and dominating) my blog site over the past few weeks, I'd be leaving out a huge addition if I didn't include this beauty. 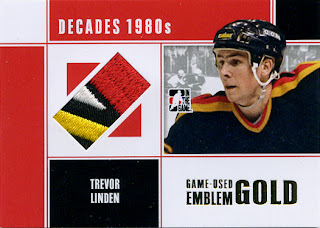 Over the past year, I've been on the lookout for the various jersey, number and emblem card variations put out in this stellar product.  A grand total of 9 cards to complete the board.

Well, as luck would have it....I had 8 of the 9 cards after some good fortune on the hobby boards, some timely bids on ebay and some tremendous (and appreciated) help from various collectors who know of my hockey card (and Linden) obsession.  The only card left on the list was the emblem gold 1/1.

The search didn't take long before I found out that another Linden collector had the final piece of the puzzle.  What to do?

On one hand, the card was in the personal collection of a fellow Linden collector.  Someone I've known in the hobby for years and who I've had the pleasure of meeting during the Trevor Linden jersey retirement ceremony a few years back.  On the other hand, it would be a stunning accomplishment to have the full set of cards.

So, I respectfully e-mailed him, made him aware that I had the other 8 cards and asked if he would consider trading his 1/1 for one of my 1/1 Lindens.  I had never asked a person to part with a pc item....so it was something that I wanted to make sure was done with the utmost respect and care.

The initial response was a positive one (in that it wasn't a flat out - NO).  But I thought that if he were to part with the card (even for one of my 1/1's) I should at very least add some additional cards to show my appreciation.

He's also a Sedin collector....so the hunt was on.  I added a few cards to the deal.  In the end though, it was unnecessary as he indicated that a straight up one-for-one trade was a fair deal to him.

Linden collectors are the best.......I'd like to say that right now.

That didn't stop me from sending the additional Sedin cards as a very heartfelt 'thank you' for the kind gesture.

So here is the full tic-tac-toe board - the only Linden one in existence. 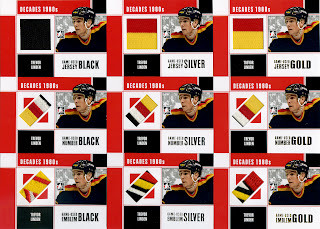 Thank you very much Victor for trading an item from your pc.  It is a card I will cherish.  I appreciate your hobby approach and enjoyment.
Posted by bamlinden at 12:37 AM