LINDEN CARD(s) OF THE WEEK - The Last Of The Haul

This past week brought in the one last piece from what I would consider the most jaw dropping additions to my Trevor Linden pc - EVER.

In addition to the Dominion quad auto that I never expected to see sitting in my collection, to the absolutely stunning 2-piece Captain's C from ITG's newest release, this last card was one that I've been looking to cross off the list for 8 long years.

But before I get to that, I thought I'd share a couple other important cards to hit the mailbox this past week.  All I can say is - you sometimes find things when you least expect it. 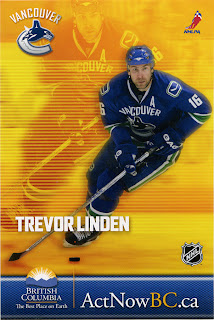 This postcard-sized card was from a promotional set put out by Act Now BC.  I had never even heard of these cards until I tripped upon one on ebay a couple years ago.  There are 6 cards in total (Daniel and Henrik Sedin, Brendan Morrison, Willie Mitchell and....Byron Ritchie?).

Of course in my sometimes frugal nature, I decided that $12 was too much for just the Linden (after seeing one go to another Linden collector for less than $10).  I held off on purchasing one and then all of the sudden.....I couldn't find one for the life of me.

It's a tough card to miss with the vibrant yellow background.  For a long time I felt like I had let one get away.  I'm not sure why it took me so long to think of this....but the card front has a website on it.  Why not try asking them.

I went to their site a few months back and asked for information on the set and if they had any extras.  I got a very quick response and they indicated that they no longer had any sets left.  (fingersnap)

I was left to wait for the next one to hopefully pop up somewhere down the road.

Fast forward to a couple weeks ago when out of the blue, I get an e-mail from them saying that they had found a couple unopened sets, had remembered me and wanted to know if I was still interested.  Um....yup.

So they fired a set off to me free of charge.  I couldn't believe it.  I was thrilled to see it arrive in the mail and this Linden can now proudly sit in the collection. 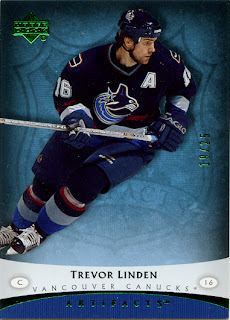 This card was not so much a surprise when I heard it was available.....a different surprise was in store for me instead.

I got an e-mail from a local card guy who knows I'm big into Linden.  He said he came across a couple of Linden parallels and wanted to know if I'd be interested in trading.  Anytime there are Linden parallels I can get my hands on via trade - I'm in.

So last week at the local trade night, he brought them along.  This Artifacts green parallel /25 and its blue counterpart /75.  I was stunned to see the sale tags on them.  A whopping $7 for the pair (BTW....that's a ridiculously fantastic price).  I was almost ready to fork over some cash when I remembered that he was up for trading.  Even better.

He scoured through my traders and found a couple cards to his liking (a Kent Nilsson rookie card and a Sam Gagner parallel /50).  I was on cloud nine after that deal.

But it got better.

I get home that night to go through my cards and my lists......I needed the green parallel /25.  It's been on my wantlist for 8 years.  I was floored.

To cross off a Linden /25 after this long without seeing one.....and not even knowing I had done it until after the fact.  I had quite the laugh over that one.

I can't wait to tell him next month.


Now if you thought that this was the long-awaited card....you're wrong.  There's one more in this little show & tell.  And it's a doozie. 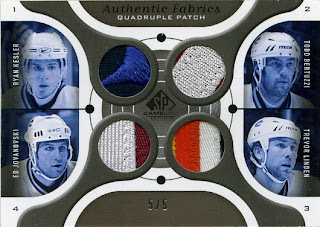 Just to see this card is amazing in my mind.  To land a copy of it after this long is borderline unheard of.

The cards from this set really challenged me and my resolve when it came to my pc.  There are a pair of triple jerseys /25, a pair of triple patches /10, a quad jersey /10 and this quad patch /5.  A total of six cards on the wantlist with this one being the last to be crossed off.

When I saw it pop up on ebay at about the same time some of the other big cards were listed, part of me thought that the hockey card gods were sending me a message saying "you can't have it all.....so choose wisely".  Another part of me thought "here's chance to get this card for a little less knowing we all don't have that deep of pockets."

Well, this one was a big pickup (and the price was reasonable....but still cringe-worthy).  In fact, it goes right up there with the other ones recently on the show & tell board.

It just goes to show that you never know what might be coming down the pipe.  Sometimes you can be prepared for it....while other times you've just got to hang on for the ride and hope you don't drown.
Posted by bamlinden at 12:14 AM