TO THE BIKE SPOKES!!! - Bruce Gamble

Time to show off another beauty from the infamous 71/72 hockey release.

You may remember this wonderful card (truly worthy of Bike Spokes immortality).

I don't know who was calling the shots that year, but some of the decision making was absolutely outstanding.  From glued on heads to terrible facial expressions to bad player re-sizing, this set has it all.

But the card I will be featuring this time has that "attention to laziness" I look for when wanting to throw something in the spokes. 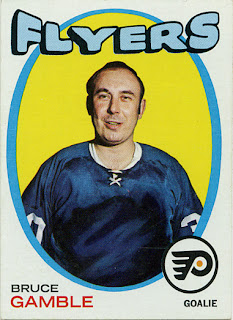 First of all, Bruce Gamble looks more like my uncle than a pro athlete.  Secondly, someone get this guy a bib!  He spilled something on his jersey.

It's pretty clear what was trying to be accomplished, but my question is - WHY?

If you're going to 'remove' a logo, at least do it with a little, tiny bit of discreetness.  But no....a big blob of blue (dark blue) must go in its place.  It makes Gamble look like he plays on a beer league team.

What are they trying to hide?  Or do they actually think that the hockey card buying public is going to gloss over this?

Whatever the reason, it's not good enough to defend the hideous card front that is Bruce Gamble (sorry dude).

When doing nothing is your better option, you know that you're on the wrong track.

Bruce, for your terrible attire......