A quick post tonight to give a shout out to a new member of the hobby board that I hang out at the most, and to a couple of other members who gave him my name.

It resulted in a great "win-win" scenario for not just me....but another Linden collector.

A while back, I had my eye on an auction for a Trevor Linden Captain-C autograph.....the gold version.  The gold ones are numbered to just 10 so finding one was tough in itself.  This auction was really well hidden too (I like those).

It seems that the seller listed the card via ebay.ca and listed his shipping destination to just Canada.  What did that all mean you ask?  Well, if you did a search on ebay.com......you would not have seen said card.

With just a few minutes left, the card was sitting at a mere $10.  A huge steal if you ask me.  I prepared my bid and with seconds left - hit enter.

To my surprise (and disappointment) I was unable to bid on the item.  I ended up not submitting a bid and somebody walked away with a stellar deal on the card.

I later found out that I was blocked by the seller and not allowed to bid on any of his items.  It seems I had purchased from him before.....and the transaction did not go smoothly.  What can I say - he sent my cards in a plain white envelope.  I called him out and he responded by blocking me.  That was a year ago.

The moment I found that out, I was relieved that I hadn't won the auction for the gold Linden auto.  I even messaged him letting him know that he missed out on a huge sale.  I was prepared to pay 8 times what the card went for.

Fast forward to a couple weeks ago.  I get contacted by someone out of the blue saying that he was told I might be interested in a card he had.  Yup.....same card (a different copy of it though).  Absolutely I was interested.

He was new to the hobby boards and so I helped him through the transaction process.  I even offered to pay upfront (as it is policy to have the new user send first).

Everything went silky smooth and today I received this little gem in the mail... 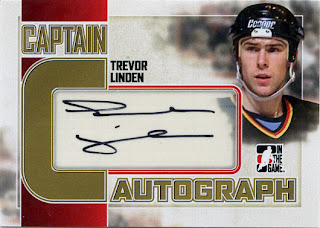 This is a great card to cross off the list.  I was able to land the card for well less than the $80 I was going to bid on the previous one (I would have lost out on it anyways) and thus both Linden collectors got great deals on this card.

And a huge shout out to you Stef for helping me with my Linden collection.  And to the pair of members who gave Stef my name - thanks as well.  I really appreciate the great camaraderie that exists between collectors.


One extra tidbit.  Wednesday is monthly trade night.  I'm looking forward to seeing some of the goodies people picked up at the Toronto Expo.  And one goody in particular that someone picked up for me.  Stay tuned....it's a gooder.