While my ITG Between The Pipes box break might not have been anything to write home about, my single pack win in pack wars at traders night earlier this month swung the pendulum well in the other direction.

That's the big benefit to playing pack wars in a busy shop.  One win can equal an entire box of cards.  And that was the case here. 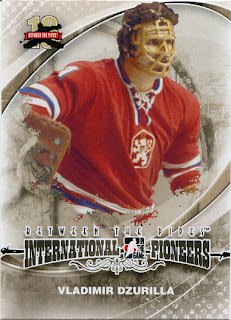 I got more base cards.  Enough to finish the 200-card set right?  Guess again.

But first......check out that gorgeous Vladimir Dzurilla card.  I'll go on record and say that it's the nicest base card in the set.  Great looking pretzel-style mask, solid overall photo and I really like the card design for this subset.

So here are the base card final numbers (for essentially 2 boxes worth of BTP).  I have 100 doubles but am short 25 cards in the set.  I realize that nothing is written in stone, but I'm a little bummed that 2 boxes doesn't get you a complete base set.

Hopefully I can track down someone who has some doubles.  Maybe do some old fashioned trading. 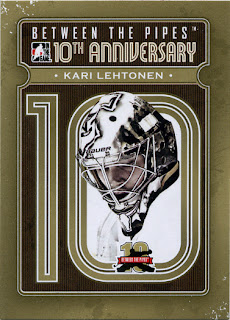 Just one 10th Anniversary insert in my win.  It'll be a fun set to build. 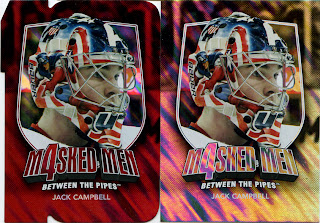 Not as fun as the Masked Men 4 cards.  These are great.

I must say though, that I was mistaken in the checklist for the 50-card set.  There are some non-NHLers.  Actually.....one.  Jack Campbell. 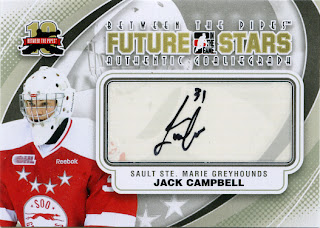 Jeez.  This must have been a Jack Campbell box or something.  Can't complain to much about this one.  He's got a little more hobby love than a number of the Future Stars autos in the set. 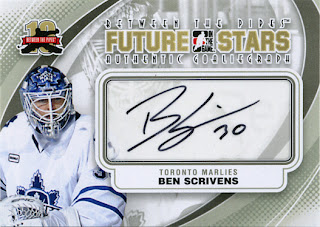 Same can be said for Ben Scrivens.  Sloppy scribble.......again. 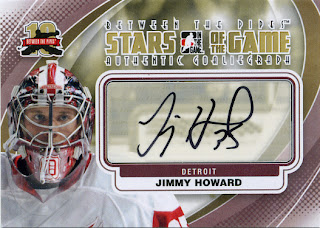 Jimmy!  A nice hit.  Getting a current player is always a plus. 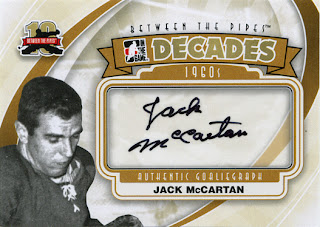 Jack McCartan played in just 12 career NHL games (all with the Rangers in the early 60's).  What makes Jack a big part of hockey history though is that he was the goalie in net for the 1960 USA Olympic gold medal hockey team.

Before Jim Craig and the Miracle On Ice, McCartan and his US team created their own storybook ending beating out highly favored teams from Canada, the Soviet Union and Czechoslovakia.

In fact, it was his play in the International tournament that paved the way to the NHL for Jack McCartan.  This card just got a lot cooler in my eyes. 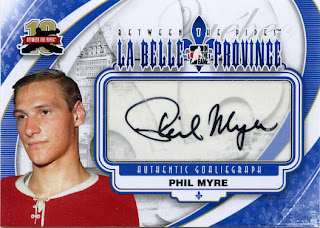 Another cool looking card is this Phil Myre auto.  The blue dominates this La Belle Province auto subset and Myre's signature looks great.  I didn't win this card in the pack wars round (I had a triple jersey that I traded for this and the following card).

I later found out that this is a shortprint in the set so it was a bonus for me. 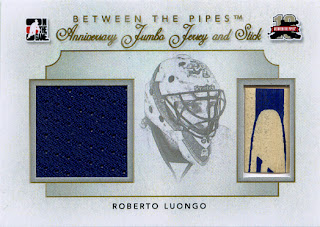 Speaking of shortprints, this Jumbo Jersey and Stick card of Roberto Luongo is limited to just 10 copies.  I had no idea when I made the trade.  I feel like I had really tilted the trade in my favor (something I will keep in mind at the next trade night.......I'll be trying to even up the stacks a bit). 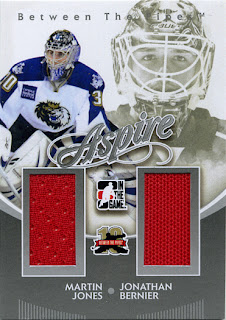 Speaking of jersey cards, this dual Aspire jersey card is a nice concept.  I only wish Jones' favorite goalie was Jonathan Quick. 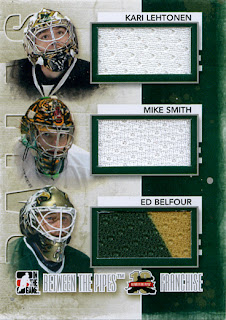 This triple jersey has a bit of a weird feeling to me.  I'm still getting used to the fact that Lehtonen is now the man in Dallas.  I forgot that Mike Smith had the reigns and Belfour is the only one that really makes sense to me.

I would have loved seeing Beaupre or some other goalie from the 70's or 80's, but c'est la vie.


That takes us to the big hit in my pack wars win.  The moment I saw this card, my jaw dropped. 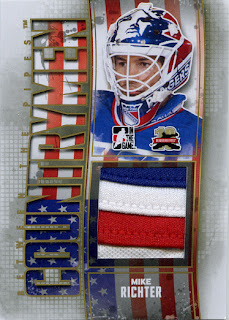 This Mike Richter Countrymen card is the gold version (limited to 10 copies) and is absolutely bursting out of the card. 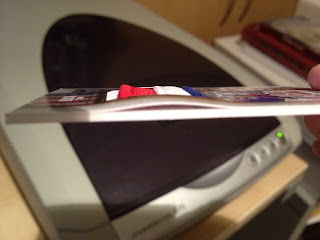 In fact, when I was first handed the card, the bottom portion of the jersey was folded completely out of the card (I did a little reconstructive surgery to get the jersey back in there).

This card design is probably my favorite in the entire release.  This card is an amazing representation of the subset and the jersey (not a Rangers jersey.... but a team USA jersey ) is about as good as one could have asked.

I was pumped to see it hit my grubby little paws.

So that wraps up what was probably the best pack wars win I've ever had.  Except for the fact that in addition to winning all the cards, I would get another one of the Cross Canada Tour 1/1 envelopes.  So it was just one bonus after another. 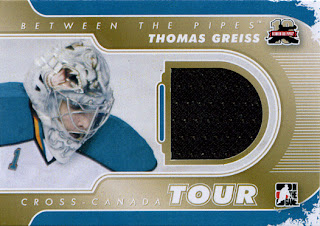 Bonus?  Bust?  Who cares.  I'm pretty sure I can find a Thomas Greise collector out there somewhere.

That leaves me with just one more post to wrap up my Between The Pipes escapade.  Next up.......masks!