I was recently contacted by a fellow Linden collector as he was looking to get some info on an older parallel card.  I thought it would make for a good blog post (and it would give me a reason to scan some under-appreciated cards sitting in my monster box).

The card in question was a parallel from the 1997/98 Pinnacle Certified series. 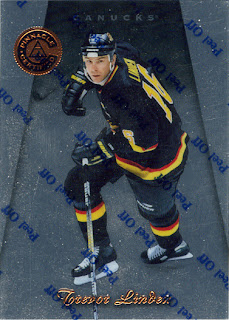 Here's the base card for those of you who might not be familiar with it.  It does not scan well and the "Peel Off" cover doesn't do the card any favours either.  I can say that I have peeled some of the coverings off and the card underneath is pretty impressive to say the least.

But me being a stickler for the original presentation of a card....all of mine are unpeeled.  Maybe if I get bored in my old age, I will track down a second set and peel them all. 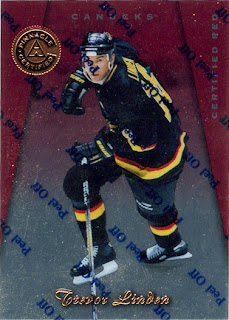 The first parallel I'll show you is the Certified Red.  Obviously, the difference here is the red background.  This card had an insertion ration of 1:5 packs, so finding a copy shouldn't be too difficult (and should be a very inexpensive purchase..........I'm talking quarter binder material). 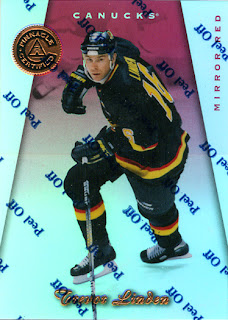 Next up is the most common 'mirror' parallel.  This Mirror Red card is seeded in 1:99 packs.  Now hobby boxes of this product were 6 cards per pack, 20 packs per box so landing one of these Mirror Reds fell 1 per 5 boxes approximately.  A tougher find, but still not a big dent in the wallet (a few bucks).

By the way, none of these cards are serial numbered on the back.  Only insertion ratios were released. 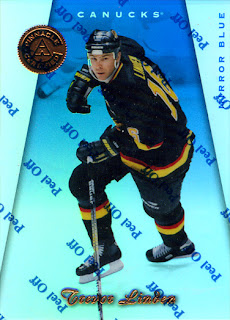 That leaves us with the parallel with the longest odds of being pulled (and the card in question from my original inquiry). 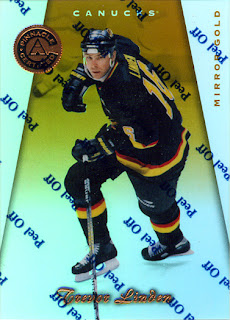 This Mirror Gold card is tops on the list when it comes to hits from this product.  Falling at a ratio of 1:299 packs (or 1 out of ever 15 boxes), this (I guess) would be considered the "case hit".  My (somewhat out of date) Beckett Annual Price Guide has this card listed at 20x to 50x that of the regular base card (that's for the star players.......which Trev will always be, except when it means a higher bv price on his cards).

I would give fair market value on this card around the $20 mark.  That said, supply and demand play a huge roll in older cards like this.  It could easily sit with no takers at $20 yet it could spark a bidding war and go for double.

Hope that helps.  And thanks for the question.  I enjoyed getting the ol' cards out and putting them through the scanner.
Posted by bamlinden at 8:00 PM