BEHIND THE MASKS - Masked Men 4

The last chunk of cards I'll show off from my Between The Pipes pickups at trader night come from my favorite insert set concept of all time.

Goalie mask cards have been of huge interest to me for years, and if you throw some vintage lids my way....the 'wow factor' goes up even more.  This year, BTP's insert offering is called Masked Men 4 and this 50-card set is one of the nicest yet. 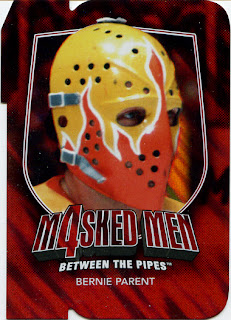 I've already raved about the fact that the base version of the cards are die-cut in the shape of a '10' (to commemorate the 10th year that Between The Pipes has been produced) and that the silver and gold parallels are non-die-cuts.  The red background color is a great choice (the cool colors....blues and greens and the reflective silvers were just starting to feel a little stale).

But what makes or breaks a mask set for me is player selection and photo quality.  And from what I've seen so far, this year tops them all.

The vintage Parent above comes from one of my all-time favorite photos of him when he played for the Philadelphia Blazers of the WHA.  There are a few vintage masks present in the set, but the bulk of the release caters to goalies currently in the game. 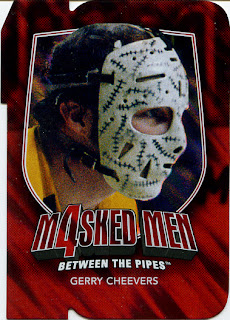 But since I'm a vintage freak, I'll start with the oldtimers pickups first.  This Gerry Cheevers is nice in the fact that it's an earlier version of his stitches mask.  In later years, the fibreglass mask would cover more of his cranium.  Still nice, but I like it when you can just physically see more of the goalie's head. 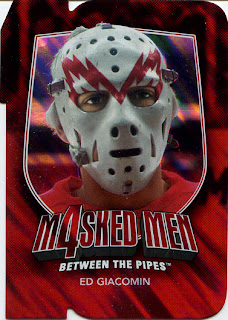 Love this photo of Eddie Giacomin.  Unfortunately, it's been used a few other times in ITG cards and the repetition is starting to make the card a little less impressive.

But, what can you do.  It's probably the best offering from Eddie.  So why not. 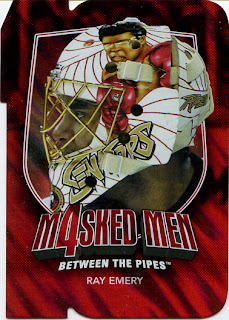 On to the current guys.  And while Ray Emery has ventured to 2 or 3 teams since the time he wore this lid for the Senators, this mask really stands out as one of his best.  This incarnation shows Muhammed Ali painted on the side, a much better representation of the tough battler Emery wanted to evoke than the controversial Mike Tyson mask the year before.

It's seeing the individual personalities of the goalies represented on their masks that makes this set really appealing to me.

Here are the remainder of the pickups from trade night.  A couple of the photos are a little too head-on and unfortunately you don't really get a solid feel for what is depicted on the mask.  As well, there's no write up about the mask on the back of the card (that's the biggest miss for me with the set).

Overall though, this has the chance to be the most fun set to build.


Along the lines of masks, I thought I'd end this Between The Pipes lovefest by commenting on the redemption decoy cards that are inserted into the packs that don't contain memorabilia cards. 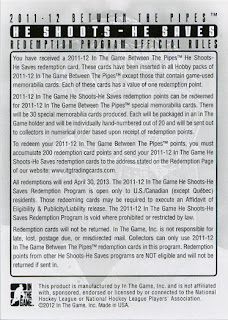 Looks like your standard practice.  Collect enough of these bad boys, send them in and get in return a really cool 'He Shoots, He Saves' memorabilia card.

But ITG did something unique this year that has turned these potential throwaway cards into pieces of cardboard with a little extra value. 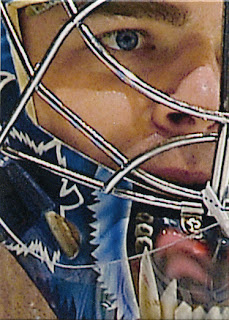 Puzzles.  Another nice chase.  Find 9 cards that fit together and voila....you have yet another goalie. 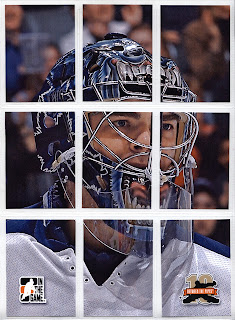 That's just smart in my books.  There are about 10 different goalies to build.  I'll admit, I didn't decide to chase any and instead traded away whatever others needed.  I've got a couple dozen cards left but most of them are Tony Esposito tufts of hair.

That's the least exciting part of the product.
Posted by bamlinden at 11:17 PM