There are a number of different ways to see a hockey card.  You can see it as just a photo on a piece of cardboard, you can see it as a memento of your favorite team or player, you can see it as a card number needed for your set.  A card can sometimes offer interesting pieces of information.....(sometimes) and a card can also identify and represent a historic moment in hockey's history.

But there are times when people see certain hockey cards as 'filler', 'junk' and suitable for the garbage.  The next time you take that stance on a card or cards, keep this post in mind.  It'll show you that there are some pretty neat nuggets of goodness in all cards.

When you hear the name Bill Mosienko what do you think?

That amazing feat is one of those records that will never be broken - NEVER.  But it got me thinking about something else.  And with a little searching, I came to find a pretty interesting fact. 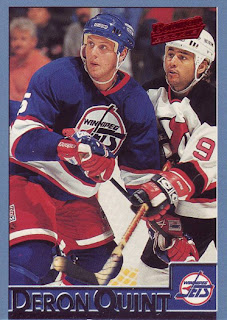 DID YOU KNOW: Winnipeg Jets defenceman Deron Quint holds the NHL record for the fastest two goals.  An unheard of FOUR SECONDS.

The year was 1995  and Deron was a rookie with the Winnipeg Jets.  That's right.......rookie defenceman.  He scored just 5 goals during his first NHL campaign but on December 14 he made hockey history.

The Jets were playing the Edmonton Oilers and had the powerplay in the second period.  Quint was open at the point and scored what wouldn't be considered the prettiest goal......but it sure looked better than his second tally.

Quint's unlikely pair tied him with Nels "Old Poison" Stewart with having the fastest pair of goals in history.  Nels turned the trick 64 years earlier in 1931, is a member of the Hockey Hall Of Fame and is considered one of hockey's all-time greats.

Deron Quint played in 463 NHL games spanning 6 teams.  He scored 46 career goals.  Polar opposites holding on to the same record.  Only in the NHL.