Well, I'm finally getting around to showing off a mailday/trade from way back in the day.  That's right......an old school trade.  You know, when two people swap cards.  Somtimes just because.

Brad over at Cards From The Crease saw a post of mine from months back regarding an Ondrej Pavelec Saving Face card from Panini.  I thought that when I originally obtained the card I could put it into my goalie mask pc.  Unfortunately, I didn't realize at the time that the card was an Expo redemption card (it had a stamp in the bottom corner that was near impossible to catch at the time).

Brad indicated to me that he had a copy of the product release card (among other pieces of cardboard I might be interested in) and thus the beginning of the trade.

I gathered up a few cards I thought he'd like and mailed them off.  Soon after, he did the same.  What was really cool was the fact that I had no idea what the package would consist of.  It was a little bit of a blind trade. Kinda fun.

Anyways, here are the goods.... 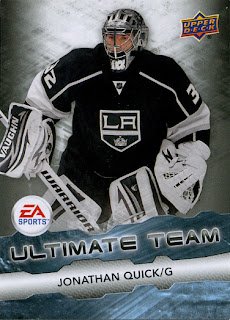 Can't go wrong with this guy now that he's a Stanley Cup (and Conn Smythe) winner.  I haven't seen much of this insert set from UD, but a very nice card indeed. 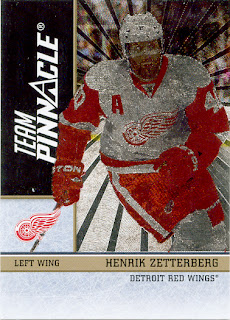 This is an interesting card.  First, it's double-sided.  Those cards are a bit of a 'hit or miss' for me.  But slap the word Pinnacle on it and I'm immediately vaulted back 20 years ago when card collecting was a lot more about fun.  Second, this card is part shiny.....part not.  Don't normally see that.  Kinda neat. 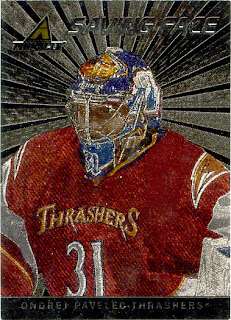 Here's the card mentioned earlier.  Cool concept.....but a terrible scanning card.  I've found that you can see the card better when it's in a bit of a shadow.  Nice. 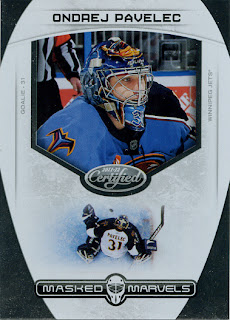 Another mask set I'm building......and another mask set that fall a little short.  Too small a window for the closeup shot.  Still, a nice card to add to the pc. 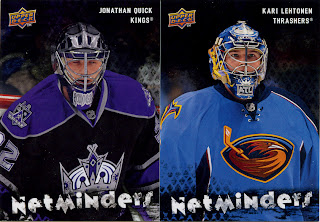 More masks!  This is a set that I'm slowly (very slowly) building.  This set would be so much better if the photos were a little closer and the masks were the primary focus (as opposed to the jersey emblem). 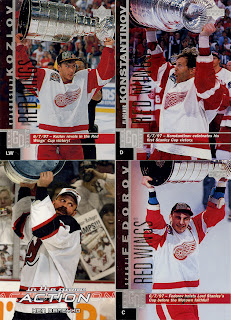 Thanks for thinking of my projects Brad.  These cards are going to be a cool addition.  I really like the Daneyko as it's one I've never seen before. Probably never would have found that one either since it's in a pretty obscure set.

Love the photo of Konstantinov.  Magical!  It's what I love about this project - capturing the moment. 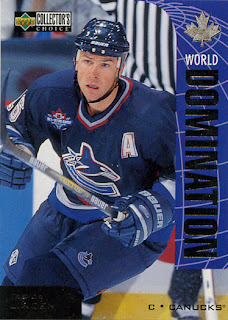 Nice!  Any Linden card is a very welcome addition.  Although I already have this one, I will continue the tradition of swapping out the current one in the collection and replacing it with this copy.  Much appreciated. 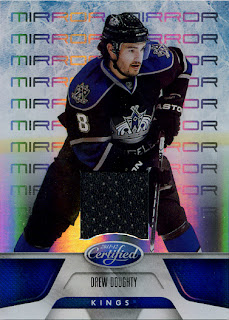 This was a sweet surprise.  I wasn't expecting any memorabilia cards.  Certified really improved on their product from year one (but still have a little way to go) and again.....another King.  Really like this addition. 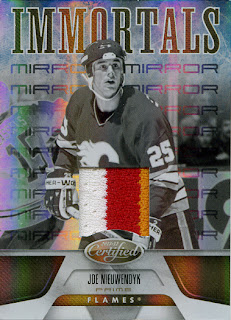 And while I like the last card......I love this one.  Wow!  What a great jersey piece, what print run and what a player.  This is a fantastic card.  Knowing that this piece comes from one of his Flames jerseys really puts this over the top.

I remember being at the Dome the night Joe hit the 50-goal plateau for the  first time.  The place was electric and Nieuwendyk showed us all a glimpse of what he would become during his career.

Thanks very much again Brad.  These cards were much more than I had expected and I really appreciate your generosity and enjoyment of the hobby.
Posted by bamlinden at 9:47 PM

Labels: Behind The Masks, My Collection, Raise The Cup