It's been a while since I've seen a Linden card hit the mailbox (and by a while.....I mean about a week to 10 days).  But I was really happy to see this card arrive as it's been one on the radar for longer than I normally wanted.  But I'm learning (slowly) that patience is a virtue.

When it comes to the lower-range Linden inserts, I tend to gobble them up as fast as possible.  I've learned though that I'm throwing away quite a few dollars with that practice.

This year, I've tried to be more selective in my pursuit of these cards and show patience in snagging them.  While it means the cards stay on the wantlist just a little longer (which could bite me in the butt) the payoff is that I get the card for a better price. 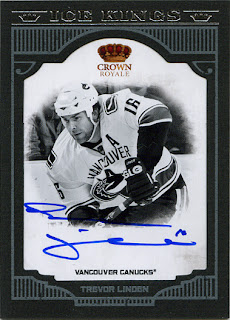 When I first learned that Trev would have 3 cards inserted into this year's Crown Royale product I was thrilled.  A nice number to chase.  Two of those cards were had for less than a couple bucks (a base card and the unsigned Ice Kings insert) leaving this autographed parallel the remaining item on the list.

The first few copies of this card to hit the market went for well over $30.  I thought to myself that a card /99 (even if it was an auto) is just too much.  I chalked it up to people just wanting the card in that initial wave of release.

It took longer than I thought it would, but finally the card price started dipping to about $20-22.  Still, there were a number of people looking for $30-35 for it.

A couple more months passed and I noticed a couple cards hitting ebay at the same time.  That's always a nice treat since it dilutes the desire just a bit.

I set my sights for the second auction and set my bid.

While I still feel I paid a little more than I could have gotten the card for, I was happy with the end result.  I got the card for less than a lot of others picked up this gem for.

But wouldn't you know it, I saw another copy hit the auction block just last week.  It ended a couple days ago for a whopping $10.  Doh!

If I would have just waited one more go around.

Oh well, I still got mine for a great price.
Posted by bamlinden at 3:29 PM