Jonathan Quick's stock has shot through the roof over the past couple of seasons.  Anybody remember the time when Quick and Bernier were battling it out for the starters job?  Easy to say gone are those days.

With a Stanley Cup ring and a Conn Smythe pickup in his back pocket, Quick has firmly cemented himself as one of the elite tenders in the NHL.

Now comes the fun part......staying there.

The world of 'A' goalies was one I thought would have become extinct with the retirement of Marty Brodeur (whenever he's going to hang up the mask), but Quick is making a statement that he wants to be in that next crop of dominant goalies - year in, year out. 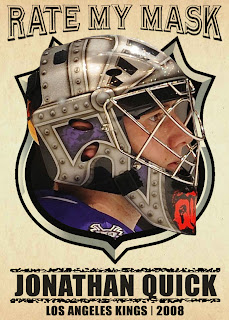 So I'm taking a look at Quick's mask from his rookie season, before the hype and attention.  And to be honest, the look has stayed relatively the same through the years (the big difference being the removal of the purple and sticking with greyscale tones). Designed by Steve Nash of EyeCandyAir, this mask is called "Helmet of Salvation". It has a very bold 'armour helmet' look with lots of great detail.  From the realistic layering to the rivets to the purple accents, the look really gives a simple but effective message to those looking at it.

I'm still trying to figure out the reasoning for the red 'blood-style' lettering on Quick's name down on the chin.  Definitely seems out of place.  Something that was improved on with his recent lids. 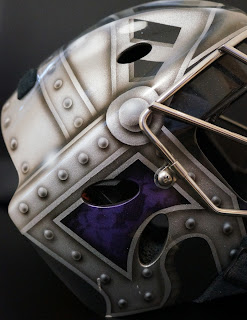 I'm also a sucker for the symmetry this mask possesses.  A lot of times, goalies have one look on the left and another on the right (and there's nothing wrong with that), but the fierceness of this mask comes from the battle ready look he gives you when staring you down. 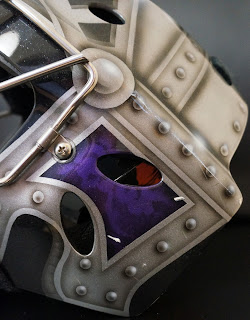 And while the front of the mask has a distinct color palette representing (at the time) the LA Kings' look, it's the backplate which really throws one for a loop. 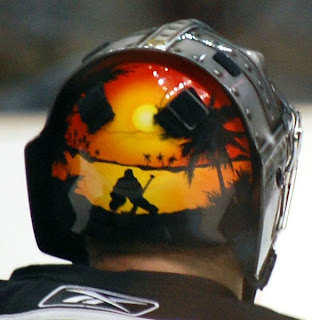 LA palm trees and sunset with Quick stopping pucks on the beach. 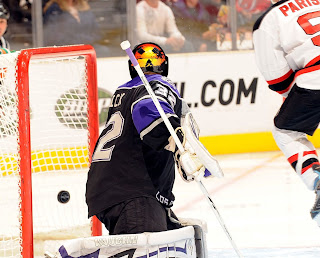 If you didn't know what his mask looked like, you'd be expecting something completely different based on the backplate alone.

It just looks out of place.  But it works (unlike the front chin).

Now it's your turn to Rate My Mask!
Posted by bamlinden at 12:36 AM