A quick post to show off some of my pickups from a couple weeks ago.

Traders night brings forth the opportunity to play a little 'pack wars' and I'm a sucker for gambling.  Most times that's not a good thing, but last month's big Between The Pipes win had me pretty much committed to a round or two the moment I stepped foot into the store.

It's not a high-end product and some of the cards coming out of the packs have been very slick.  But with my guy not in the mix this year, I really didn't give it much notice.

That was until I won a round.

It was a 3-round event and the first pack wins were pretty boring.  The second though was where all the goodies sat.  3 different black patch/autos (the big hits) were among the winner's take.  Needless to say, I wasn't holding out hope for much after I was victorious in the final round. 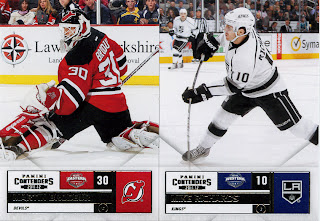 I won a little over 100 base cards.  A decent design.  Has the feel of the good ol' Pacific brands from 15 years ago.  The photography is pretty stock with the occasional 'wow' card.

The inserts don't really 'wow' me either (except for the Contenders Legacies cards which I will be chasing). 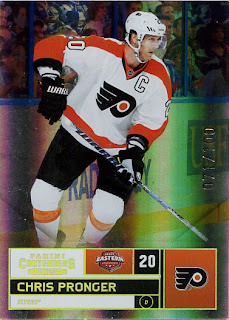 Chris Pronger..........again!  This guy is definitely stalking me in my pack rips this year.  Nice card though.  The foil makes the player cutout pop nicely. 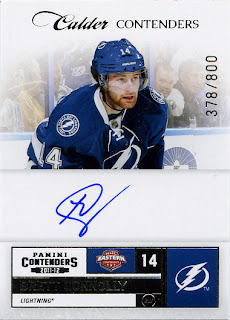 Here's the 'big hit'.  Woo hoo.  Thanks Mr. Connolly for taking a moment to scribble something representing your name on this card.  It will truly be cherished.

Actually, I landed a couple other autos (both Canadiens) and promptly traded them to Captain Canuck.  I had no use for them and he like Montreal (which by the way made some nice additions today in during 'Free Agent Frenzy'........it was 'frenzious' right?).

At the end of the night, any winners of the Contenders pack wars were given a couple packs of Panini Father's Day promotional cards.

Hey, these guys aren't hockey players.  But I did land one. 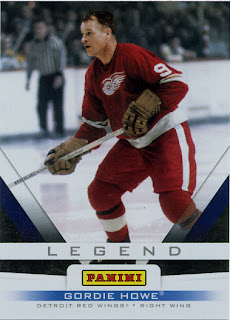 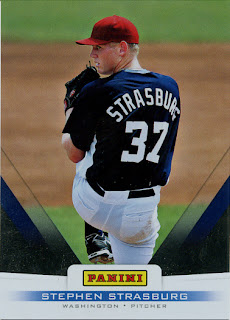 I've heard of this guy.  He's good right?  He rookie card says so.

Another Father's Day pack ripper pulled a card that I needed to make a trade for as soon as I saw it. 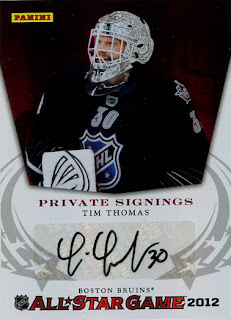 Cool.  Autos in free packs are even more awesome.  I have no idea how many of these exist or what it might go for, but I was happy to trade for it.

I don't know if my luck will continue in July, but you know I'll be giving it a shot.
Posted by bamlinden at 10:44 PM