After many hours of hunting, searching, begging and the occasional fist pump, my list of 30 sports documentaries is complete.

The six remaining movies are coming from various sources and with some help from a few friends.  Thanks to them for helping me build this list.

The final six docs include...

Seve: The Legend.  This is one I'm very excited about.  Spanish golfer Seve Ballesteros was one of my faves growing up.  I learned of him during the downside of his career and didn't fully appreciate what he brought to the game.  In later years, I realized just how creative and unique he was.  He courageously battled brain cancer for three years but sadly did not win his fight.  He was 54 when he died in 2011.

This documentary celebrates his life and his career.  Here's a snipit...

His character and enthusiasm are sorely missed in the game today. 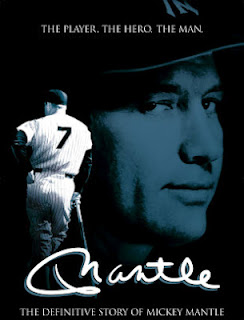 This is an older doc (2005) so it might not have the production value that their current titles have, but I think the subject matter might make up for it.  Mickey Mantle is, to a generation of fans, THE guy.

Never fully healthy during his 18-year career, he still managed to belt out 536 home runs.  He and Roger Maris captivated the baseball world with their chase to 61 (by the way.....that's a good movie too).

The History of the Boston Bruins.  Produced in 2009 by the NHL, this looks to have everything crammed into 90 minutes.  When I see interviews by Phil Esposito, Ray Bourque, Cam Neely, Derek Sanderson, Brad Park and footage of Orr, Cheevers, Cherry just to name a few - I get excited.

Add to that, the guy who does the voiceover (Gord Marriott) is somebody I've worked with in the past.  You guys in Canada will recognize his voice from the 'Oil Change' series.

I stumbled upon it on youtube and am excited to see this.

Fire On The Track: The Steve Prefontaine Story.  I don't know what it is about this guy, but I am always interested when I see something about him.  There have been a couple "made for TV" movies done about Pre and this doc was a must for the list when I found it.

Here's one that is coming out of left field for me (and also shows my lack of knowledge when it comes to soccer).  Sir Bobby Charlton: Football Icon is a biography.  That's all I know.  But it's done by the BBC and the first minute of the doc drew me in completely.  Really excited to learn something about a person I've never heard of.....where so many talk so highly of him.

Disposable Heroes: The Blood, Guts and Tears Side of Football is a doc from the 1980's and shows the side of the game that few see - what happens to our heroes after their playing days.  The picture drawn here isn't too pretty.  Permanent injuries, disabilities, financial difficulties and emotional pain follow many off the field.

I'll be interested to see how this aspect of the football world is portrayed (as the doc is almost 30 years old) in comparison to today.

Now.  That's 30.  But I've decided to add a couple "bench warmers" to the list just in case one of these 30 docs falls through the cracks and I'm unable to secure a copy during October.  They include:

A Football Life: Tom Landry (there's nobody like him out there these days)

Zidane: A 21st Century Portrait (a soccer star....but I only remember him for his final act on the pitch)

And with that - I'm ready to rock.

My next task will be to create a calendar indicating which docs I will watch on what day.  I will also double-check the availability of each doc since the goal is to watch one a day for 30 days.

After watching each doc, I plan on doing a write-up.  Giving you my overall thoughts and a link (if applicable) should you want to check it out yourself.

Wish me luck.  Should be a ton of fun.

"ON THE BENCH"
Mario Lemieux: The Best Ever
A Football Life: Tom Landry
Zidane: A 21st Century Portrait