LINDEN CARD(s) OF THE WEEK: Time For A "Cup"date

The first wave of cards from Upper Deck's top-end release The Cup have been cracked, hit the open market and have been gobbled up by collectors.

Only one by yours truly so far.....and you'll have to wait until it arrives before I show it off.

Until then, let's take a look at some of the beauties that will not be coming into my collection any time soon. 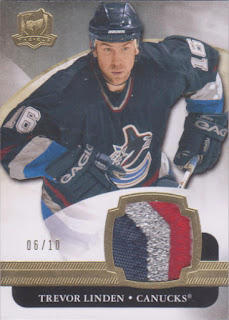 This was the first Linden card to hit ebay.  It came and went in a matter of minutes.  Why?  Because it had a sweet "buy it now" price of $100.  A card that nice from a high end product like The Cup, add to that it's the first on the market and it's numbered to just 10.

Some of the other great buys have come from the base cards and parallels /25.  I couldn't believe the prices.  I'm kicking myself a bit for not jumping on one at the time.

This Limited Logos card is one that has me intrigued.  Numbered to /50 (which in my eyes is a lot), these have been going for a fair penny.

Don't get me wrong, they are some fantastic looking cards, but I don't know if $200-300 is the price range I'm looking at spending.

I'll bide my time and hope for the best. 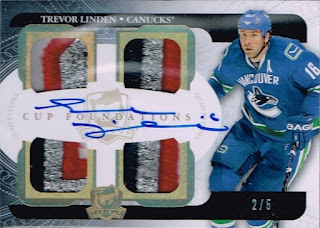 Two of these bad boys have already come and gone.  Numbered to just /5, these Foundations Quad Patch auto cards are stunning.  But with stunning comes pricey.

Not sure if this one will ever hit the collection, but I'll never say never. 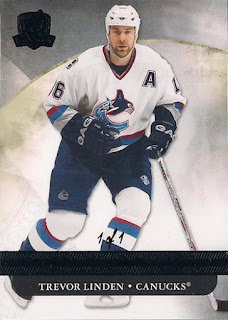 This black base parallel is a 1/1.  One of many to already come and go.  It was on ebay just last night - again for just minutes.  The sad thing is I had been checking ebay quite frequently that night and just missed it. 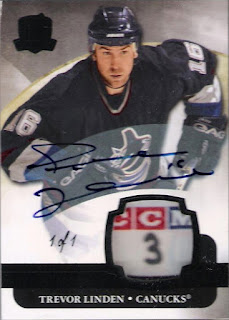 And speaking of tags, this is a stunner.  The first of its kind when it comes to Trevor Linden cards.  And the finishing price on ebay reflected that.

$500.  Double what I would have paid, but she's a nice addition to whatever collection it went to. 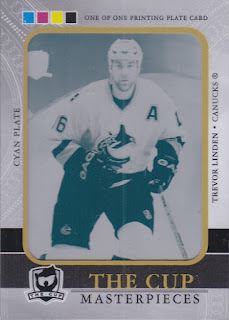 There are four printing plates and the first one arrived on ebay.  (I sound like a broken record) It came and went lightning fast on ebay.  For just $150 it was a easy hit for whomever snagged it.

I'd love to get my hands on one of the three remaining. 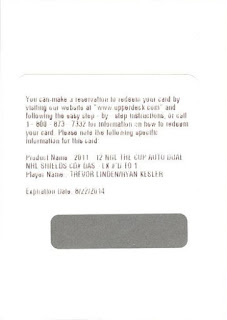 That brings us to the king of The Cup.  The Dual Shield/Auto card (with Ryan Kesler) was pulled last week and promptly placed on ebay with (what I thought was) a ridiculous buy it now price.  $2200!

It got 11 offers on the card but all of them declined.  The card finished it's auction run with no takers.  But here's the kicker...the listing says that the auction ended because the card is no longer available.

I'm trying to get a hold of the original owner of the card to see if he has parted with it.  Not because I'd like to buy it but because I'd just like to track it.

I'm sure it'll pop up again once the card has been redeemed.  It usually goes for a lot more that a piece of cardboard with a redemption number on it.

UPDATE: Just heard from the owner of the card.  He's decided to redeem it.  I'm excited to see what the actual card looks like (as opposed to what I just see in my mind).

So there you have it.  A bunch of cards I want....but none of which I have. It's funny, a few years ago I would probably have been frustrated about that.  But this time around - I'm just goin' with the flow.  A couple of these cards have landed in the laps of true Linden collectors (and for that I'm thrilled).  Will I get my fair share?  I think so.  But if I don't....then that's ok.  It's unrealistic to think these all could have been mine.

Now on a completely different topic.....where's my lottery ticket?
Posted by bamlinden at 12:09 AM