Last week was the good ol' monthly traders night and while I'm always up for a fun night of sportscards, pizza and packwars, this month's offerings had a little extra something in store.

Earlier in the week, I had learned that there would be a couple of tins of The Cup offered up for a team style raffle.  I knew that I wouldn't be dropping any cash down for a tin of the stuff myself so I thought this might be something that would "fill the void".

Basically how it works is you pay a certain amount for a random team and if any cards from your team show up in the pack break - you get them.  Sounds simple, and at $15 per team it's a way to get in on the action without breaking the bank.

Seeing some of the "$15 gems" that were had by a couple of the guys there at the shop had me dreaming of a massive Linden patch or rare auto nicely landing in my lap.

The first go around had me pull Los Angeles out of the bag.  I was hoping for Vancouver, but I quickly had people remind me of the benefits LA might lend.  Still, I decided to trade my team with the guy who had Vancouver.  After all, if a Linden happened to be pulled - I wanted it.

But that didn't discourage me.  After all, there were two more tins.

The second go around and I scooped New Jersey.  Again, not bad for potential.  Again, I ended up trading my team for Vancouver.  And again, no dice.  The guy who had Colorado though landed two massive hits from the tin.  He easily made back 10-15x the price of his team entry.  Nicely done.

That must have been the motivation for me on the final tin to buy two slots.  I hit Pittsburgh and Philadelphia.  This time, I decided not to trade my picks.  And it paid off.  Here's the card that showed up in the final tin. 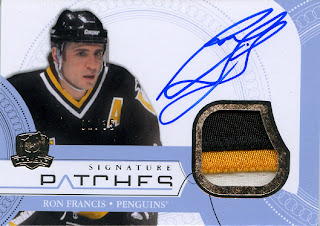 A really nice auto/patch card of "Ronnie Franchise".  Hard signed signature and a three color patch.  Add to that, it's numbered 01/35.  What's not to love.

Of course this card cost me $60 ($90 if you include the swings.....and misses in the Panini Prime breaks as well), but I was just happy to walk away with something.