still captured me, captivated me, had me hanging on the edge of my seat and reminded me of a time when hockey was everything to me.  I loved it.

Shown in pretty much their entirety (say for the intermissions), it was a glimpse into the game the way I remembered it as a kid.  And I ate it all up and licked the plate. 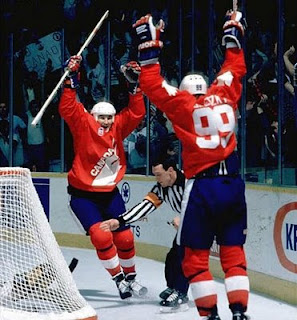 Gretzky in his prime, Lemieux as the new kid (who towered above everybody else), the KLM line (Larionov, Makarov, Krutov) who were absolutely magical and an jam-packed, electric crowd.

I was 14 at the time this series originally took place and although it's 25 years after the fact, I still soaked it in with all the same feelings and emotions as I did back then.  I haven't enjoyed hockey this much in a long time.

During the intermissions, there was a current panel consisting of Team Canada coach Mike Keenan (maybe the one time I could tolerate the guy....just a bit), defenceman Larry Murphy (who had the series of his life) and Igor Larionov (man he's awesome).

Larionov summed it up best by saying that the 1987 Canada Cup was a "masterpiece of hockey".  Spot on.  Even though he was on the losing end of the series (all 3 games ended 6-5...one in OT, one in double OT and of course the unforgettable Lemieux goal late in game 3) Larionov looks back at the series as something truly special.

If you are in the mood for some exciting, fast-paced, offensive hockey I urge you to check it out.  I'm not sure if they'll re-broadcast it or have it up on their website, but track it down.  You'll be glad you did.