There have been many times where we have seen athletes compete and succeed beyond what we expect.  Where their pursuit for excellence has become bigger than the performances themselves.  Where they have continued to inspire well after their competitive days are over.

Muhammed Ali, Michael Jordan, Wayne Gretzky all fall into that category. But there is one name I would like to submit to you for consideration.

I've heard the name 'Pre' for a long time.  An intriguing middle-distance runner who created a tremendous buzz in his sport at such a young age.  His determination and guts pushed him to limits that were unheard of for such a young person.  An inspiration in his day, he still is at the forefront of many people's minds when you talk about the best runners in track.

His story has always been of interest to me.  There have been not just one, but two tv movies made about his short life.  But when I tripped upon this documentary, I knew it would be on the list for this month's viewing.

Tonight's film - Fire On The Track: The Steve Prefontaine Story 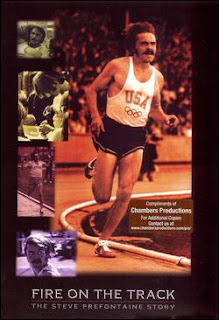 Fire On The Track: The Steve Prefontaine Story (1995)
58 mins.
Rated:NR (but it's suitable for all ages)

"The legendary distance runner Steve Prefontaine blazed across tracks and into America's consciousness before meeting a tragic death in an auto accident at the age of 24.  After setting high school running records in his native Oregon, Prefontaine went on to the University of Oregon, where as a freshman he began to dominate the American track scene and appeared on the cover of Sports Illustrated.  His race in the 5000 meters at the 1972 Munich Olympics is shown in detail, a race that 'matured him' and made him determined to win gold at the 1976 Montreal Olympics.  This is a touching look at a brilliant athlete and a charming character who still inspires runners today."  (source: amazon)


Link to the film - I watched it online via youtube


When I saw the film's 1995 creation date, I was a little concerned.  I've seen a lot of movies from that time period that just don't hold up with regards to style, music, graphics and overall quality.  I was a little disappointed that this doc fell right into that mix.

Off the top of the film, we hear from Phil Knight, one of the founders of Nike.  I never realized how much of a connection there was between Knight and Prefontaine.  So much so that Nike's headquarters only has one statue - that of Pre.

We step back to the 60's - the golden age of track, where it is considered the second most popular sport in America.  The interest was at an all-time high.

We learn a little about Steve growing up.  Born in Coos Bay, Oregon, Steve was a rambunctious kid who always used sports as an outlet - especially at school.  Brash, confident, and very much a rebel he had dreams of competing at the Olympics even at a young age.

He became a high school star in track, setting numerous school and state records.  He was highly scouted by numerous colleges but was a little disappointed that his local college, Oregon, was not sending him a letter. We hear from track coach Bill Bowerman that sending letters was not his style.

Bowerman along with friend Phil Knight started a small shoe company around the same time that Pre was entering college.  In the fall of 1968, he had indeed heard of Pre and before long Steve was on his way to Oregon.

Pre was touted the country's running prodigy and made the cover of Sports Illustrated at the age of just 18.  No surprise, but that didn't sit well with this teammates at the time.  He was constantly butting heads with both his fellow runners as well as his coach.  Steve was determined to do things his way.

There are a lot of photos and some good archive footage so far in this film.  I was surprised by this as the production quality is very much a "local vibe".  It didn't seem like a big budget doc.  Quality footage and a good mixture of interviews so far.  But the music is killing me.

Because Steve was a hometown kid, the events at the local track were electric.  Steve would feed off the energy and send it back into the packed stands.  I could only imagine what witnessing an event there would have been like at the time.

We finally hear from Pre (unfortunately there is little interview footage of him in this doc).  We see the kid becoming a man as he becomes even more dominant in his college years.  Breaking US records almost at will, he also breaks many stereotypes when it comes to running.  Steve's very extroverted, outgoing and likes to party.  On the track though, he's all business.

His dedication to running is second to none.  In fact, his teammates think that was one of his edges.  He had nothing else in his life except running. It was in the early 70's that Pre also began speaking out about the unfairness in track.  He felt frustrated that amateur athletes like him who travelled to meets and generated a lot of money for a lot of other people by drawing large crowds to events would not be paid for appearances.  By accepting money, Pre would have lost his amateur status (meaning his  records would not count nor would he be able to pursue the Olympic dream).

At the 1972 Olympic Trials, Pre was dominant in the 5000 meters.  A standout runner in America, Steve had never run with great international competition. Many felt that would be his undoing in Munich.

Unfortunately, it would be something else that would affect his Olympics. The Munich hostage crisis affected him so much so that he didn't even want to run.  Eventually he did and made it to the finals of the 5000 meters.  In the finals, the pace for the first half of the race was very pedestrian.  It left many other runners with a lot of reserve left in the tank.  A stacked lineup, poor strategy and an ill-timed kick had Steve finish off the podium in fourth.

Again, some great archive footage and solid interviews really tell the story well.  Steve's finish was examined and many felt that his youth and inexperience played a role.  He had kicked too soon after what was an overall slow race.  Pre went for the gold rather than pace himself to a sure bronze medal.  Many feel that this was the way he always ran - running for first.

The music is just not working for me and the narration (Ken Kesey) is also not as strong as I would have hoped.  It's something that I constantly notice.

We hear more about Steve's battle with the AAU (Amateur Athletic Union).  He was frustrated that the American athletes weren't getting the same benefits as the European runners.

We also learn about his relationship with Nike (which at the time was only a year old).  Pre was one of the first athletes to be sponsored by Nike...and being paid in shoes.  Steve turned down an opportunity to go to a pro circuit so that he could pursue the 1976 Olympics...he had some unfinished business.

Unfortunately he would never get there.  He passed away as a result of a car accident in 1975 - at the age of just 24.  He never had his day.

He was without question the most popular athlete in Oregon and had captured the attention of a nation.  He (along with Bill Bowerman and Frank Shorter) was credited with sparking the running boom of the 1970's.

To this day, an annual track event in his name is held in Oregon.  Over his career, Steve won 120 of 153 races and never lost a collegiate race at the University of Oregon.


As I mentioned, there are a lot of interviews in this doc - some good ones too.  Key people talking about key events in his life.  But the doc falls short in its dynamics.  The music, narration, pace all feel stagnant throughout.  I think it could have been more "rollercoaster-like".  He did after all have some pretty big ups and downs.

I can only imagine what a re-working of this doc would look like these days.  The production value would be through the roof compared to this film and I think it would make for a much more engaging movie.