MY COLLECTION - Just Because

It's not often when I go off the charts for a card these days. With the growing list of Linden cardboard, masks, the odd box break (or maybe not so odd), and pickups here and there for other projects, I rarely pick up a card that just "speaks to me".

Yesterday at the card show, I had one of these rare moments.

Now in my many years of collecting, I have never seen a copy of this card.  I didn't even know it existed.  I guess I could say that about a lot of cards obviously, but I do "window shop" when I'm at the shows.  I may not know everything about everything, but if I haven't seen something for decades and it catches my eye - odds are it's a rare find. 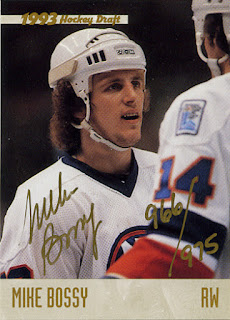 Told ya' it was eye-catching.

This sharp looking, hard-signed (in thin gold paint pen) signature from Mike Bossy was a must have as soon as I laid eyes on it.  Of course only for the right price.

But this card spoke to me.  The photo, the photo quality, the lighting in the photo even - all reeks of the early 80's and a time where hockey was everything to me.

Add to that one heck of a gorgeous autograph - in the sweet spot I might add - and the fact that I just have never seen a copy of this card.....ever, made me want to pick this up.

It had a $25 price tag on it and I asked if that was what it booked for.  The guy said yes, at the time he priced it (which was a long time ago).  That was my first indication that he has had this sitting in a box for quite a while.  He was new to the card show but I remember seeing him occasionally set up shop at a store from years ago.  Another indication that he's looking to liquidate some product.

I fired off my offer and he hummed about it.  I told him I'd keep looking to see if there were any other gems in the lot.  The nice thing about this card is that I could very easily have walked away at any point....and I think he knew that.

He countered just a little higher but I decided to stand my ground.  I wasn't sure how much these have gone for recently and he was cutting prices in half for most of his cards right off the bat.

I didn't find anything else, and he agreed to my price.  He had to go to the washroom...so I think he wanted to wrap things up quick.  Even more to my advantage.

So for $10 bucks I've brought this home.  I think it's a steal for an autograph of a Hall Of Fame sniper like Bossy.  Not sure what I'm going to do with it yet.  I might keep it, I might try to turn it around and trade it/sell it.