I'm sure this doc will be seen to some as a "non-sports" movie.  I can understand that stance.  But there are two main reasons why I'm including this title to the 30 in 30 list.

First, the subject of this film catapulted the exposure of this "sport" to levels comparable to the Superbowl and any other sporting event in North America at the time.  It was huge news.

Second.....I own the dvd and really should watch this from start to finish. 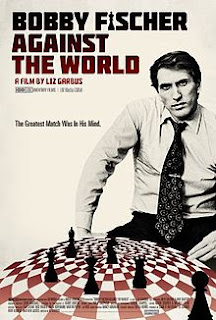 Bobby Fischer Against The World (2011)
93 mins.
Rated: PG (a little bit of swearing near the end)

" In 1958, Bobby Fischer stunned the chess world by becoming the youngest Grand Master in history.  Over the next decade and a half, his breathtaking rise to the top echelon of the game riveted the world and inspired an international chess phenomenon.  Then, at the apex of his success, Fischer vanished from the public eye.  See the true story behind the troubled genius, from his meteoric rise to fame to the growing madness that finally consumed him."  (source: the back of the dvd)


As mentioned, I own the dvd....and can put it in the "have watched" pile.


This is another HBO documentary and I'd like to say that these guys do a darn fine job.  I'll feel safe in the future choosing something from their list sight unseen.

In a nutshell, Bobby Fischer was the greatest chess player in the world.  But he not only was the greatest player, he inspired a generation of people to take up the game.  It became part of popular culture in the 70's. It also was a political vehicle and seen as a way to signify one's superiority intellectually.

We learn about Bobby's early life.  He began hanging out in chess clubs as early as 8.  He constantly played the game - even if it was against himself.  Obsessive even at an early age, he had a sort of genius level of understanding.

In 1958, still in his teens) Fischer became the United States chess champion and was crowned a grand master.  His knowledge and popularity was something that his mom recognized could be capitalized on.  He would gain both fame and publicity from the world of chess.

Just a quick note...the archive footage in this doc is tremendous - probably the best I've seen so far.  Fantastic photos and video.  The music creates a great mood and is very dynamic.  The interviews though are what I notice most.  Some key people in Bobby's life are interviewed and they look and sound great.  It's a very polished doc to this point.

Bobby developed a penchant for having things done his way.  Very demanding.  The World Chess Championship was coming up in 1972 and Fischer was the representative from the US.  He would keep refusing to go and flip-flopping back and forth.  Even Henry Kissenger got involved and tried to convince Bobby to go.  Eventually he agreed.

The match would take place in Iceland and was top news in America.  Regularly scheduled programming would be cut in order to show these matches (it was the best of 24 games).  People would skip work and watch. This event received huge ratings.

Fischer continually complained abut the room, the cameras filming, the sound the cameras were making - everything.  He had an excessive sensitivity to many things.

Once the match got underway, the back and forth battle began.  Fischer's unorthodox methods made his opponent, Boris Spassky, become more and more tense.  He struggled to maintain his composure and eventually he becomes the weaker of the two.

Some great editing during a couple of photo montages in the middle sections here.  The end of the match comes when Spassky retires during game 21.  Bobby Fischer is crowned the new world champion.

Up to this point, Fischer's increasing paranoia and feelings that he is being spied on are talked about.  After he wins the world championship, he becomes more of a recluse and goes into hiding.  He begins spouting more and more anti-American and anti-semitic remarks.   He gave up the game to a world of neurosis.  But where did he go?

He stayed out of the eyes of the world until 1990.  He came out of isolation and soon after a "revenge match" with Spassky was set up.  It was to be played in Yugoslavia in spite of a United Nations embargo.  Both players were shadows of their former selves in the match which Bobby ended up winning.  An arrest warrant against Fischer was placed and he became an ex-patriot by refusing to comply.  He never set foot on US soil again.

He slipped into obscurity again after the Spassky match.  Now a fugitive, his negativity towards the United States intensified.  So much so that when the terrorist attacks of 9/11 occurred, some pretty harsh words were said by Fischer.

Fischer lived for a time in Japan but was arrested in 2004 and was about to be deported.  In an attempt to evade deportation, Fischer received asylum in Iceland.  Welcomed by the people of Iceland, he gave a news conference and lived out his life as a recluse.  He continued to alienate people that he met and really had no companionship.

Bobby developed a urinary tract infection but refused dialysis.  He died in 2008 from degenerative kidney failure.  He was 64.


This was a very interesting documentary.  I saw it as three parts....his life before the '72 World Championship, the match itself and his life after.  The story of his life is both amazing and tragic.  There were many great interviews that kept the topic compelling.

Very well edited, it tells a pretty complete story.  The archive videos of Fischer along with the most recent footage of him in Iceland really paint a strong picture.

Do you have to be a chess fan to enjoy the film?  I don't think so, but having some knowledge of the game or even the events from the 70's help.

Compelling, it's one of the better docs I've seen this month.