One of the best things to come of this month long documentary project is the discovery (and eventual ownership) of tonight's film.

I vaguely remember watching chunks of this on tv years ago and for the longest time couldn't even remember what it was called.  Only after some dedicated searching did I come across the title.

Sadly, the doc never made it to dvd....so it was vhs all the way.

If I never watch another video on my vcr, I can say thank you to it for allowing me to play this movie.  These little gems are what it's all about. 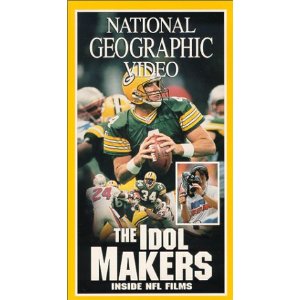 "If you want to really feel the game, only NFL Films can get you this close.  For more than 30 years, they've captured the 'in-your-face' collisions on the field and the behind-the-scenes dramas from the sideline to the locker room.  How do they do it?  At Super Bowl XXXI, National Geographic Television became the first to film the NFL cameramen in action, turning their cameras on these fearless 'shooters' as they sprint and shove to get the best action shots.  As the Packers battle the Patriots in New Orleans, you'll discover how these idol makers turn players into warriors, and a game into an epic struggle."  (source:  back of the vhs box)


As you can see, this is NFL Films....shot by National Geographic.  That right there is enough for me.  There is one small piece of info that has me concerned though......1997.  I'm a little afraid these days of docs done in the 90's.  Let's see if this can hold up.


The montage off the top of this film is fast-paced, action-packed and everything I would expect of an NFL Films production.  The music though....OUCH!  My worst nightmares have already come true.  I'll try to look past it though.  As well, it's weird to see anything NFL that's not 16:9 or HD quality.  This is good ol' 4:3 standard definition.  There can be good stuff done that way...I'm just saying it's odd to see.

We hear from Steve Sabol (who essentially was NFL Films for years) and how the focus has always been "the struggle" as opposed to "the strategy" in football.  I've always loved that about NFL Films.

note: Steve Sabol passed away just over a month ago.  His contribution to sports documentaries is pretty much unparalleled and very much appreciated by this hockey card blogger.

The scene is set.  Super Bowl XXXI in New Orleans.  The Green Bay Packers vs. the New England Patriots (pre-Brady BTW).  It's estimated that 70,000 fans will be at the game and over 600 million people will be watching the event around the world.  With those numbers, "event" is an understatement...it's a "uniquely American spectacle".

There will however be a third team on the field tonight.  For over 30 years, NFL Films has been capturing this spectacle in a very unique way. They are not news reporters, but storytellers.

By the way, the writing in this doc is really good.  The words just roll off the narrator's tongue.  Fantastic flow (even with the hokey music).  And the b-roll.....well it should be obvious - second to none.

Hey, it's a young Michael Wilbon giving his two cents!  I like him.  I wish there was more of him in this doc.

NFL Films look for the uniqueness of the sport.  Often the best shots are not found during the play.  Many times, they aren't even on the field.  It's about capturing the way the event of the day transcends the sport.  And for today's game...it just doesn't get any bigger.  Over 17 cameramen will be capturing the sights and sounds of the championship game.

We get a brief history of NFL Films - started by Steve's dad, Ed Sabol.  He received a movie camera as a wedding gift and for years would film his young boy's antics, adventures and football games.Yup, he's the kid who's dad videotaped everything.

Ed Sabol did more than just shoot the highlights of the game, he captured the event.  The fans, the sidelines, the sounds.  NFL Films was born and they have grown ever since.

I was interested to learn how critical the sound is to NFL Films.  Getting the audio in the huddles, during the discussions on the sidelines and especially the hits on the field really raised the interest level of what was being captured.  A nice little montage is shown to demonstrate.  I didn't know that they place mics in the pads of the players.  They must be disposable.

We are taken through the warmup, pregame and kickoff of the Super Bowl.  We follow a few key cameramen through the event.  Each person has their own set of responsibilities - from capturing the game itself to sideline banter to strictly crowd...and then there is "the weasel".  He just shuffles around getting anywhere and everywhere.  Finding new perspectives and unique shots.

NFL Films still uses old school film (love it) and one of the challenges is that a roll of film captures only about 10 minutes worth of footage.  Lots of cartridge changes.  Efficiency at that is key.  You can't capture something if you're not hitting record.

Some great footage of how involved these guys are in capturing the action is shown.  They are so focused  - to the point of obliviousness - that they sometimes become part of the play.  These guys just don't get out of the way sometimes.  It's all about getting the shot.

As the final gun sounds, the NFL Films team keeps rolling on postgame action.  Seeing the chaos turned into beauty (by simple slow motion of the film) makes some of the stuff these guys capture a true art form.

In the end, 245 rolls of film have been captured.  That's 41 hours of Super Bowl.  And all of it gets carted out asap so it can be processed and hit the edit suites.

Speaking of....I'm a little miffed that there is zero talk about the editing of NFL Films various productions.  To me, NFL Films is more than just the filming....it's writing, editing, archive, sound, voiceover, there is so much more.  And as somebody who edits sports for a living, I really wanted to see some of those behind-the-scenes goodies.


At the end of the day, this was a pretty darn good doc - even for a late-90's production.  How good would it be if they did a version nowadays?  It would blow this one out of the water.  But in looking at the time when they produced this doc, it worked for me.

It didn't get as in depth as I would have liked, but it was still a fun ride to follow these guys throughout the Super Bowl (it was just a one game follow). They packed a lot into less than an hour.  Definitely more pros than cons.


I couldn't find a single review about this doc online.  Clearly a sleeper.  Odd.