STASHED IN THE CLOSET - Never Before Seen

Went scrounging around in the closet.  Wanted to find some goodies to scan and show off.  Found these (totally forgot about them).

As many of you know, I'm a big fan of photography in sports.  When I see a hockey card or archive photo in a doc, I appreciate the "moment in time" aspect a picture can capture.

A few years ago I was at a flea market and came across a table with a bunch of hockey "stuff" on it.  Programs, newspapers, press photos, team black & whites and contact sheets (in addition to bunch of hockey and baseball cards).  Needless to say, I spent the bulk of my time hovered over this table.

In talking with the dealer, I learned that he was a photographer for the various sporting events around Calgary in the 80's and early 90's.  Based on the stuff he had on his table, I'd say that's about right.

Here are some items that I found particularly interesting. 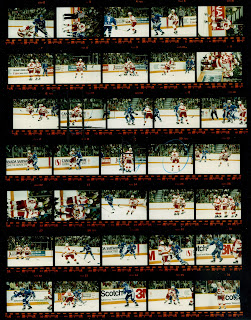 This contact sheet comes from November of 1987.  A contact sheet is a layout of a roll of film on an 8x10 with the photos not appearing as negatives, but positives.

This one has the Calgary Flames playing the Quebec Nordiques.  Guys like Hakan Loob, Joe Nieuwendyk and Mike Vernon are fairly easy to identify.  As for the Nords....well it was pre-Sakic so there might be a Michel Goulet and that's about it.  Maybe a Stastny?

There are a lot of grease pencil marks on this sheet as well.  You can see which photos were used (or suggested to be used) in newspapers and such. 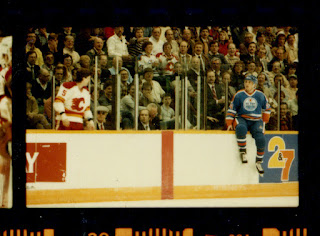 Here's a closeup of a great shot from a Flames Oilers game in March of 1985.  Can you name the two goons....er enforcers eyeballing each other?

Lots of personality and attitude. 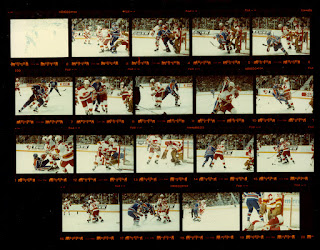 Finally, a couple of sheets from a Boxing Day tilt in 1984.  Anything with the Oilers from that time was a no-brainer to me.

But it was this final sheet that I was most interested in. 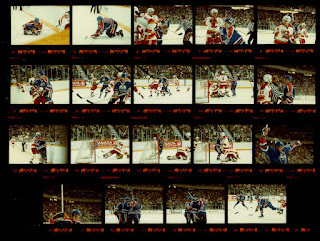 Well, if you look closely you can see a celebration shot in the lower right hand area.  Seems pretty obvious who that guy is.

But don't worry, I blew up the shot a little more for you to see. 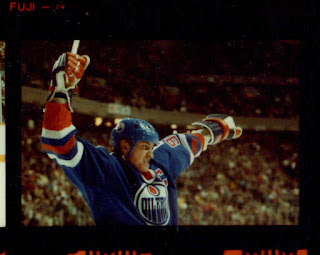 Now think about this for a second.  There's no grease pencil marks which would indicate that the shot wasn't used.  Odds are that this photo never saw the light of day at the time (and would be highly doubtful to get a second look if it didn't have any markings).

There's a good chance that this picture of Wayne Gretzky has never been seen before (other than by the photographer and maybe a couple people working at the paper almost 30 years ago.

Take a look at the snarl on Gretzky's face.  The attitude.  The emotion in his body as he celebrates the goal.  And I love the depth in the shot - all the fans just nicely blurred in the background.


Now to figure out what I'm going to do with these sheets.  I was originally thinking of framing them.  I think they might look good as a set or something.

Or maybe I'll just put them back in the closet and forget about them.  :)
Posted by bamlinden at 12:07 AM

Labels: My Collection, Outside The Box