A lot of the film I have been watching this month have revolved around a team who exceeds expectations or completes something special.  Individuals that overcome a huge obstacle or are honored for their achievements.  In stepping back, I guess that's what makes for interesting documentaries.

There are personalities that make me just cringe because of something they've done in the past or the way they present themselves now while others make me respect and admire them even more for just being who they are.

Documentaries are a wonderful thing.  The movie I watched this evening is a perfect example of what I enjoy about docs. 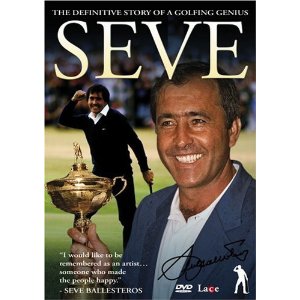 (I've been told that this dvd is not the same one I watched....I'll have to confirm that)

"Only the most charismatic are known by just one name.  Known to his adoring public simply as 'Seve', Severiano Ballesteros took the world of golf by storm and transcended the sport, with his magnetic personality and sublime skill."  (source: BBC)


I borrowed this from a friend.  Much thanks!

First off, I'd like to say that I wish I was just a little older.....just 5 years.  I'd have been able to better appreciate just how great Seve was at golf.  I remember him more on the downside of his short career.  It would have been fantastic to see the magic as it was happening.


Almost immediately, you get a taste of the imagination, creativity and fun Seve Balleseros brought to the game of golf.  His passion and joy for the sport are unparalleled in my opinion.  A fantastic sense of humour along with being a true warrior makes him one of the most beloved and revered players of all time.

We start in the "present".  In May 2011, Seve passed away at the age of just 54 after a two and a half year battle with brain cancer.  You can immediately hear the emotional tribute pouring out of family and friends.  A golf tournament is set up to honour Ballesteros.  "Ole Seve!" is a project near and dear to Seve's heart and some funds were raised in the battle against brain cancer.

This is where we meet some of Seve's family and we get to know the golfer a little more intimately.

Seve started golfing at the age of 10.  We hear some archive interviews from Seve about his life growing up.  He loved golf even at an early age.  He played all the time.  At 16, he turned pro.  At the tender age of just 19, he was the third round leader at the British Open.  He came up second, but only after he opened the eyes of a lot of pros on tour.  There was a new entertainer in town.

The British Open of 1979 was the first of 5 majors for Seve.  In 1980, he became the youngest to win the Masters (also becoming the first European to take home the championship).  He became the pathfinder for European golf and the explosion of today's international flavour in the PGA can be directly linked to him.

In 1983, he won the Masters for a second time.  He also made his first appearance in the Ryder Cup (another staple for Ballesteros).  After a solid team attempt, there was great confidence going into 1985.  Sure enough...the team from Europe won.

There are some fantastic photo montages and great archive footage used.  The stories however are what I'm really enjoying.  It seems as though everybody has a great 'Seve story'.  We are bouncing back and forth between Seve's life story and the tribute golf tournament.  A very nice job of intercutting.

Always an unpredictable player, his creativity is adored.  As said in the movie "A genius does not have rules."  Some of my favorite parts of the doc revolve around these spectacular shots.

In 1988, Ballesteros wins his final major (British Open).  It is around that time that we are introduced to fellow Spaniard Jose Maria Olazabal.  Seve became a mentor to Jose and the pair were forever linked in Ryder Cup play.  Even though his playing days were coming to an end, he was still a vital cog in the team.

We are shown parts of Seve's final interview as we head into the section of the doc covering his battle with cancer.  He talks about when he first was told he had a tumor in his brain.  He spent 72 days in the hospital getting radiation treatment.  Cameras were with him the whole way.

Very emotional, you could see just how much of a fighter Seve was.  He had a tremendous amount of courage as the cancer was just stealing away his life.  Struggling through the interview, you could see how he fought right to the end.

Gracious and always with a laugh, Seve Ballesteros asked us to not feel sorry for him.  He always saw the sunnier side of the fence.


BBC did a really nice job on this doc.  They managed to put a whole lot into the 60 minute production.  I think they did a very good job of balancing interviews with family and friends with the b-roll and narration covering Seve's life.

The one big beef I have is that this is not an easy doc to find here in North America.  Now that I've seen it, I'd love to own a copy.....that will actually play in the North American region dvd players.