LINDEN CARD OF THE WEEK - Another One That's Not Mine

I knew this day would come.  I've been waiting for it.  I'm glad it's here, even if I only end up being a spectator.

You all know by now that The Cup has wreaked havoc on my wantlist for a few weeks now.  Some very nice high-end cards of my guy have sprouted up for the pickings.

One of the big cards is a dual shield/auto card featuring Linden and some other guy (Ryan Kesler).  It originally hit ebay with a strong buy it now price.  It was inserted into Cup tins as a redemption card so the desirability factor was a little lower than usual (plus the $2000 asking price).

It was pulled off of ebay as nobody was even close to putting in a bid that high.  Last I heard, the seller was redeeming the card.

Here's what popped up on ebay tonight... 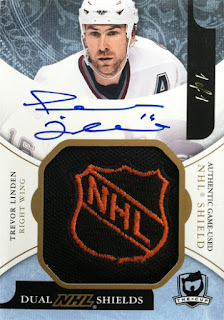 Great googily-moogily!  She's a nice card (even if that Linden auto is a little squished in there).

Here's the back side of the card (only because it too was scanned in the auction). 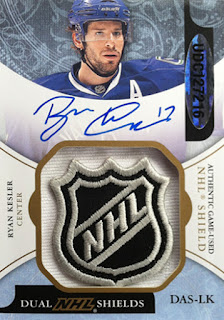 Meh.  It looks like Kesler did a little stop-start on his auto.  Not quite the smoothest one I've seen from him.

What I really like is that the seller has put it up on ebay old school style.  A regular auction.  May the best price win.

I already bid on it (only because I knew my bid wouldn't win it...in fact, it's not even the high bid right now).  Whether I'll put in a serious number is something I've got a week to think about.

I'll have my eye on it regardless. 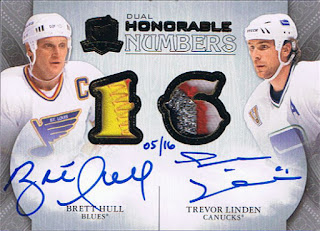 These were placed in tins as a redemption as well (Linden must have finally signed and returned his cards).  With only 16 copies of this bad boy (and the first live copy to hit the open market), this could be a very.....VERY interesting week.

Hello wallet?  How you feelin'?
Posted by bamlinden at 9:33 PM