Pack wars during traders night at the local card shop has become a bit of a trend, habit, crutch....call it what you want.  I enjoy it and every once in a while hit some nice cards to add to the trade box.

Last week's edition was a little different than normal though.  It wasn't so much a "pack wars" situation, more like a team-style group break.

Up for grabs...the contents out of one box of Panini Prime.

The way it worked was for $7.50, you'd get to pick a team out of a hat and if any cards are pulled from your team - you get them.

I knew that my guy wasn't in this product, but decided to participate anyways.  Wouldn't you know it, the team I picked....Vancouver.

Want to see what I got?  I knew that you would.

With the card being revealed ever so slowly (to add to the excitement, tension, frustration...call it what you want), the blue and green gave it away pretty quick.  I just didn't know what player. 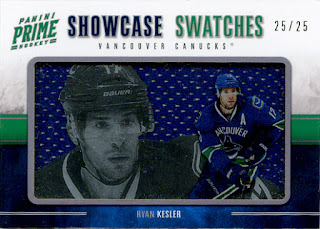 Too bad it wasn't a Sedin though.  I could have faired well in trade if it were Danny or Hank.