Well, I don't want to do another 30 docs in 30 days anytime soon, but I do want to continue to post any sports documentaries that I watch.  Both for my own records and because there might be a couple of you who would be interested in watching them.

These will not be the drawn out reviews I did in October.  No chance.  These will be short and to the point.

I watched this offering a couple days ago after renting it from the library on the weekend.  Free is good. 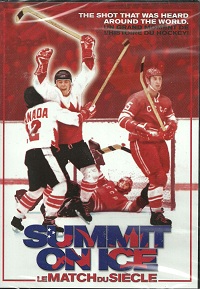 
This is a great behind-the-scenes documentary on the 1972 Summit Series between Canada and Russia.  Done in 1992 and originally broadcast on CBC, this doc has a good selection of player interviews, archive footage and inside stories.  As well, Kenneth Welsh's voiceover is  really good.

While it doesn't go terribly in-depth with some of the happenings, it does paint a good picture of the events from (now) 40 years ago.  A solid watch.