I cracked a box of 2012/12 Artifacts a couple months ago and while the 'hits' weren't all that spectacular, there was one card that really caught my eye.

Some of you may know that I'm a sucker for certain vintage things.  Fibreglass masks being the biggie.  But I also love the old All-Star uniforms that NHLers wore in the early 80's.  The orange and black jerseys with the white stars as trim are a definite eye-catcher.

So I was pleasantly surprised when I saw this offering... 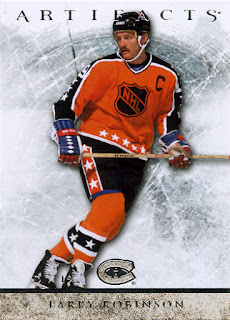 Oh yeah, that's what I'm talkin' about.  Awesome stuff.  And I really like the Montreal gloves Larry's sporting to top it all off.  Takes me back to the 1985 All-Star game I had the privilege of going to as a kid.

But as great as that photo is, there was another card that I found at the weekend card show that trumps it....well.  And it just happens to be another Larry Robinson. 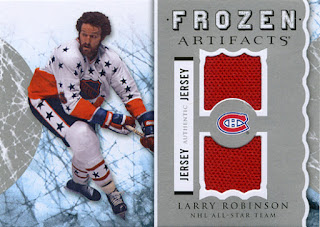 Now let's address the obvious first thing....dude's got one mean 'Wilderness Bill'-style playoff beard going on.  Spectacular!  I don't ever recall ever seeing Larry sporting that look before.

But to top it all off, Upper Deck pulls out another great All-Star uniform.  This time from the 70's.  And look at the padding he's wearing (or should I say lack of).  Robinson is a big guy, but he doesn't look as big as some of the giants out there these days.  The padding really gives a false sense of size.

Once again, the nice Red and Blue gloves going halfway up the elbow.  Now that's vintage.  And flowing hair.  Just a great snapshot.

When I saw this card I knew I had to pick it up.  If for no other reason than to give it some proper face time right here.

It just goes to show how much a unique looking photograph can greatly increase the interest and desirability of a card - even a simple base card.
Posted by bamlinden at 6:28 AM