Thirty documentaries (actually 31) in October.  A lot of interesting topics, compelling stories and unique personalities were on tap and this month-long project was well worth the trip.

While there were some less-than-stellar picks, most were very enjoyable and informative.  From simple editing and low-quality footage to the cream of the crop archive resources and high-end interviews, I quickly learned that there's a lot that goes into making a great documentary.

Some of the highlights of this October trek will be better offered up in a sort of "Oscars" format. 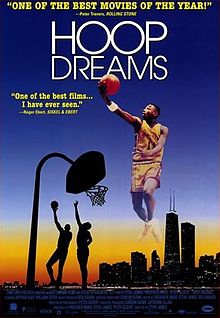 This was an easy choice.  It was the doc that has stuck with me the longest after watching it.  The commitment from the film crew and documentary subjects was tremendous and the ups and downs that both basketball players endure make them very easy to root for.

A "must watch" for any sports doc fan.

I walked into this film knowing nothing - ZERO about cricket and yet I found this doc really interesting.  Lots of great archive footage, good interviews and some music that blends it all together.  It's the title I'm looking to add to my collection the most.

You've got to be one crazy cat to do what these guys do to begin with.  But seeing some of the footage come out of those final races is amazing.  Scary...but amazing.

Honorable Mention: Seve - The Legend (final message to the fans)

I've always seen Muhammad Ali in a positive light.  This doc shows that he was sometimes a not-so-nice guy.

A great mix of pace and flow combined with some solid production elements made this doc sing from start to finish.

Not only did I not think I'd be able to watch this film when the month started, but the circumstances and events of the evening made this the best doc "experience" of the month.  Big screen watch as well as a Q&A with Chris Nilan afterwards.  No brainer.


Most In Need Of A Remake: Never Say Die - The Story Of The New York Islanders

Ugh.  This was a blunt reminder of what to expect when you are watching an NHL-produced doc from the 90's.  Even tougher to watch when it's focus is a team with such a rich history.

Honorable Mention: Fire On The Track


Worst Of The Bunch: Mario Lemieux - The Best. Ever.

Honorable Mention: Tyson (sorry....it just didn't do it for me)


Wasn't In The Cards: Undefeated

An Oscar-winning film that unless I go buy it is just not out there.  Unless I'm missing something.  I still plan on watching it....once I find it.


I could go on, but instead I'll just say that if you're ever looking for some good documentary viewing, check out my 30 in 30 posts and give one a shot.

Moving forward, I'll be doing mini-reviews of sports docs I see.  It'll keep this subject alive on my blog.  Something that's a big part of my overall enjoyment when it comes to sports in general.


And just to show how much I like some of the films out there these days, check out my pre-Christmas present to myself... 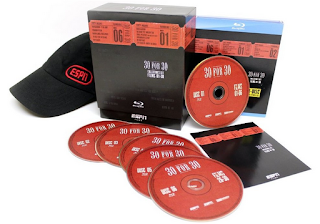 The first season of 30 for 30 is finally coming out on BluRay in Canada.  It ships next week.