BEHIND THE MASKS - Four More... Much To My Surprise

Alright.  I finally got around to drawing up a list of the Masked Men 4 cards that I still need to track down.

Yes, thank you.  Thank you very much.

Sadly, I decided not to print it out before I made the trek down to the monthly card show last weekend.  Why?  I could bore you with the long drawn out reason.  Instead I will just cut to the chase and say "I was lazy".

I was lazy, but I also didn't expect to find any new mask cards at the show.  You see, most of the dealers at the show are there from month to month.  And a lot of them either have the same ol' stuff, or they have the most recent releases.

These Masked Men 4 card fall into neither of those categories (since I already pillaged all of the tables for the ones I needed).

Wouldn't you know it, I get to the show and see a new (but familiar) face setting up shop for the day.

And he had some Masked Men 4 cards.

So I did my best "I think I need this one" and came out pretty good in the end. 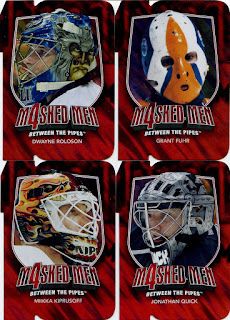 Four out of five.  In addition to these masks, I brought home a Jonas Hiller which I already had.  Not bad for the top of my head on a Saturday morning.

I knew for sure I needed the Fuhr.  That's an easy one to remember.  The Roloson didn't look familiar either.  But the Kipper and Quick had me worried a bit but happily, I needed those tow as well.

Now I'll give you more fuel to ridicule me.....

It'll get done before the next show.  Well.....it should anyways.
Posted by bamlinden at 8:15 AM