Superlative III is the newest product to shovel a multitude of Trevor Linden cards in its wrappers.  I was recently talking to a couple Linden collectors and one mentioned that there is definitely a saturation of Trev's cards in the secondary market right now.  It might be part of the reason why some of the ending prices have been going a little lower than originally anticipated.

I for one have no complaints about that.

This is a high-end product with a lot of cards being a very limited print run (less than 20).  My plan of attack this go around (and has been for the last couple releases) is to not concern myself with the "lower-end" cards as I will try to trade for them or pick them up when this wave of product dies down.  Rather, try to pick off a couple of the bigger ticket items and cross my fingers.

With The Cup and Artifacts (and to some extent Forever Rivals) not panning out exactly as I would have hoped, Superlative III has been a very successful first week.  This first card is definitely proof of that. 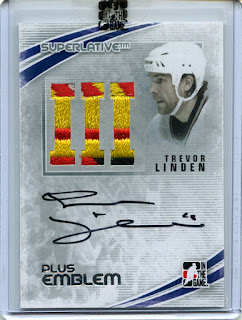 This is a gorgeous patch card with four distinct colors.  Lots of breaks and dare I say - unique.

Oh, and in case you missed it...hard-signed autograph (he nailed this one right in the sweet spot).

I'm a little torn about the window for the patch.  While I like the idea of the "III" die-cut, I can't help but think it's just taking away from seeing even more of the patch.  A big square (as boring as that would be) would give an even clearer window.

I'm also experiencing something else new with this Linden card.  Up until now any memorabilia piece that comes into my collection gets the magnetic one-touch treatment.  But Superlative is unique in that it houses the card in a sealed toploader.  My first instinct is to crack the seal and free the card.....only to seal it up again.

I've always been a big believer in keeping things the way they were originally released.  I don't peel protective coatings off of my Linden cards, I don't crack my Linden cards out of the graded slabs and I'm hard pressed to snip this sticker apart so I can yank the card out.

But boy am I tempted....especially with this one.

A very nice start to the Superlative venture.  With a card show this weekend and another trade night coming up next wek, I'm hoping to add some local flavours to these pickups.
Posted by bamlinden at 1:25 PM