A little over a year ago, Casey over at Drop The Gloves! posted a thread that showed off one of my favorite cards from the 70's.

It was rare to see a card like it at the time and moving into the 80's, 90's and beyond has become pretty much an impossible sight. 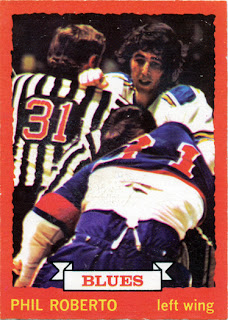 Oh man!  This is THE base card for all enforcer collectors in my opinion.  Even though you only see Phil from his shoulders up - you get everything about the moment.

Helmetless, fist cocked for the knockout blow, his opponent nicely "jersey'd" and a pair of linesmen trying to restore order.

The details in the photo really make it a fantastic card.  The numbers on the back of the linesman, the heavier sweaters, the tie-strap, the St. Louis colors peeking out on Roberto's shoulders.  Fantastic!

Seeing a scrap on a hockey card is a rare thing.  In fact, it's pretty much non-existent over the past couple decades.

So when I was flipping through singles at the card shop a few days ago and came across this beauty, I had to pick it up. 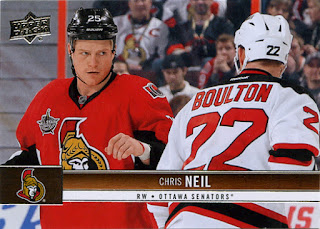 Now I know that this is a pre-fight shot as opposed to the post fight goodness from above, but the look in Chris Neil's eyes definitely make up for it.

As they say - the eyes have everything.

Neil looks about ready to explode on his opponenet, Devils' Eric Boulton.  And taking a page from Paul over at Card Boarded, I'm going to do a little 'Captured on Cardboard' add.

The tilt happened almost a year ago - January 2, 2012.  With the Senators trailing 2-0, Chris Neil decided to give his team a spark.

Back to the card for a moment.  It's rare that a moment of little action can be so memorable.  But in this instance I think there are two factors that make this card a huge success.  First, it's the anticipation of something happening.  Much like a good horror movie, it's the moments before the scare that are the best.

Second, and going back to my original thought, a card showing any sort of 'fighting' is a rare sight on cardboard these days.  Anything unique or outside the box is certain to get a second look.