LINDEN CARD(s) OF THE WEEK - Some Nice Gestures

I hope everybody had a nice Christmas.  For me, this time of year is all about my niece and nephew.  They may be getting older, but the excitement of the day still remains.

What I really enjoyed about the day (other than my nephew patiently waiting until 6:10am to call me.....last year it was before 5:00), was that the kids seemed just as interested in handing gifts out to the adults as they were opening their own.  It was pretty cool to see.

But just as cool was watching them open their presents and enjoy the day.  There's such a buildup only to be gone so quickly.  I can't believe it's over.  Time to start thinking about next year right?

I was given a couple hockey related items and I'll definitely share what I snagged over the next few days.  Today though I'd like to show off some nice gifts I received over the days leading up to the holidays. 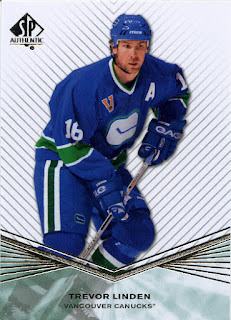 Ameet over at Hat Tricks & Home Runs asked me for my address a couple weeks ago.  As a result, I wasn't overly shocked when I saw an envelope from him hit my mailbox a few days later.

I was anxious to see what was inside as we hadn't made a trade or anything.  He just simply sent a card my way in hopes of just simply making my day.

It's amazing what a simple gesture and a little positive action can do.  Thanks very much for the Linden Ameet.  While I do already have it, I'll be swapping out the one in my pc with the one you sent me.  Cheers. 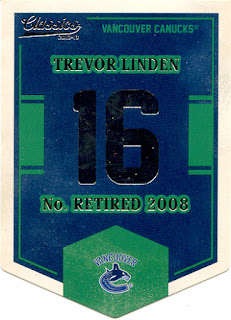 Now, I know I've bashed this Panini Classics banner design recently, but that's not deterring me from chasing one of the Linden's in the set.  After all, it's on the list.

At the most recent trade night, I found one sitting in a trade box.  Looking to make a quick trade, I was instead given the (handwave) "Nah, you take it."

Of course, I couldn't just do that so I insisted that he look through my trade box to find a card to go back his way.  He found one, and we both ended up happy with the deal.

Even if I do think these cards are ugly. 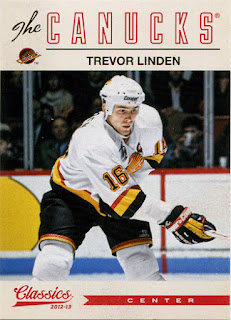 Later that evening, I tracked down the base card from the same set.  I was so excited that I took it out of the clear case and proceeded to track down the box owner.

He stated that he was building the set and that I had taken the card out of his current build.  Bummer.  But before I could express that to him he pulled out another pile of cards.  Mmmmmmm.....doubles.

I was happy to see that he had an extra Linden to give to me.

Now when I heard he was building the base set and the autos, I decided to hand over the auto I pulled from my one pack break a few weeks back.

It was the least I could go for the kind gesture he handed me at the start of the evening. 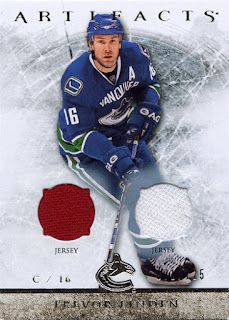 The Artifacts dual jersey was a card I had been purposefully holding off on buying.  I was really hoping to either find a nice pair of non-white swatches or trade for one.  After all, trading is more fun.

So I was even more thrilled when the card came my way with nothing expected in return.  Man that's awesome.  It might be the most common memorabilia card from the product, but it'll be one that is a constant reminder of the great people in this hobby.

I was thrilled to be able to reciprocate the gesture later on in the evening with the Bower auto.

Thanks everyone for the great gifts.  I really appreciate it.
Posted by bamlinden at 12:52 AM