As previously mentioned, this past week was the final trader night of the year.....and with it was a very nice 'Customer Appreciation' tip of the hat.

The store owner had a bunch of used Dominion tins (acting as gift holders) laying on his counter.  A random draw for names and a quick pick of a tin landed each person there a nice gift.  Some were humorous gag gifts, others were pretty nice product freebies.  But it was less about the gift and more about the gesture. 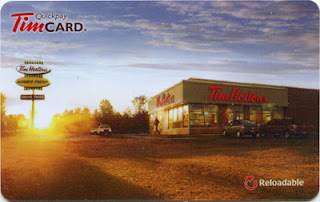 Yes, it's a staple of Canada....Tim Horton's.  I have no idea how much is on this gift card (and again, that's irrelevant) but it will definitely be put to good use.

Thanks very much Darren for the card and for putting on your trade night each month.  It might be the only time I drive across the city and pop in to the store, but it's something I really look forward to.  Have a great holiday season.


Now, I didn't leave empty-handed.  I did cave (slightly) by buying two packs of Panini Classics.  It's a product that I thought was a tad on the high side when it came to the price point.  This time though it was a little closer to the number I was looking for.  $25 per pack. 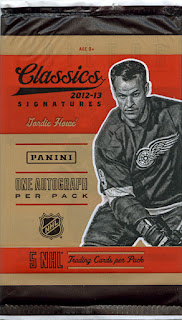 Remember, there are 5 cards per pack.  3 base cards, a banner card and an autograph. 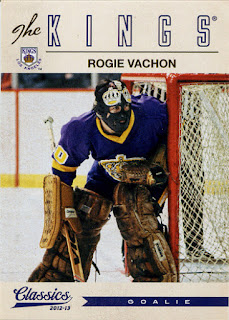 This is my favorite of the base cards.  A solid pic of Rogie in his vintage purple.  Love the crown mask.

With a set like this, photography can really dictate the popularity.  And with some of the names on the checklist, there's great opportunity for some stellar shots. 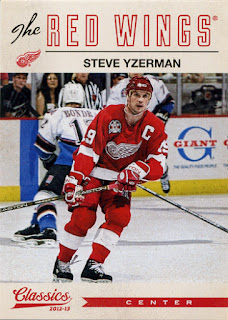 This Steve Yzerman would be a good example of how not to do it.  Stevie Y was not known as a glider and a confused individual, yet that's what we have in the photo.

I'm pretty sure that there are a couple dozen Polaroids that would have done a better job here.  A little too hasty a decision on Panini's part me thinks. 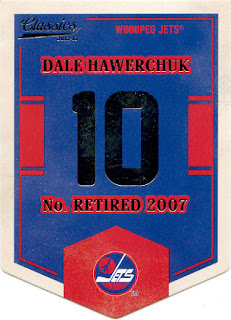 The dreaded banners.  I've made mention of my issue with them so I won't bore you.

The Hawerchuk is nice.  I'm stuck with what more to say about this card. 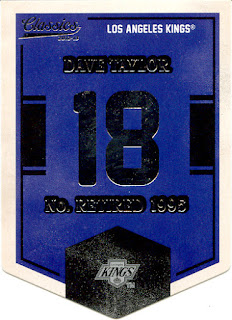 
The autographs are the big draw to this product.  Hard-signed and with a diverse checklist, this set would be a fun one to pursue.  For me, I'm just interested in the ones with Linden's sig on it. 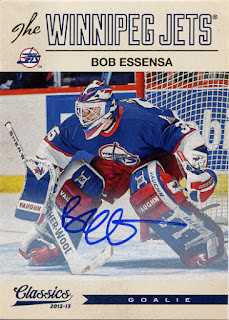 Another Jet.  Bob Essensa has a terrible signature in comparison to his counterparts.  I'd bet it's one of the worst looking in the product. 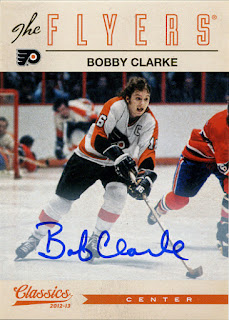 Bobby "I sign my name Bob" Clarke.  Great autograph, great photo and I even found out that this is one of the shortprint signatures.

I'm pretty happy with that.

Not sure if I'll bust any more of this stuff.  I've got a lead on the Linden base auto which I hope to trade for in the new year.  The Social Signature insert autograph will be one that I'm probably going to snag off of ebay when the prices come down a little more.
Posted by bamlinden at 12:55 AM