Last night was the final trader night of the year. It also coincided with my last day of work for almost a month.  Needless to say....it was a good day.

Over the next couple days, I'll do some catching up on my blog posts.  Showing off some maildays, some kind gifts I've received and some of the goodies I picked up at the trade night.

The first card though is one that sort of sticks out on its own.  It's from a trade I made yesterday. 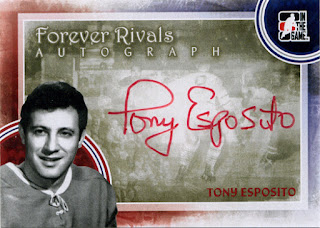 Much like my guy, Tony Esposito is not overly recognized as a member of the Montreal Canadiens.  He started his NHL career with the Habs in the 68/69 season backing up Rogie Vachon.  He played with Montreal for just the one season (only appearing in 13 games) and was picked up by the Black Hawks on waivers during the off-season.

It was the next year that 'Tony O' would post some staggering numbers.  A 2.17 GAA, 38 wins (in just 63 appearances) and of course his ridiculous 15 shutouts.  He won both the Calder Trophy as the league's best rookie as well as the Vezina for top goalie.  He was named to the First All-Star team and was runner-up for the Hart Trophy (league MVP).

This Forever Rivals auto is one of the few nice 'red pen' signatures I've seen so far.  Most have had a bit of streaking or bubbling as the pen and surface texture of the card just don't play nice together.  I think that's part of the reason I've held off in picking up the Linden auto in the set.  I want to try to find a real nice one.

This one....is just that.  I saw it and made a nice trade for it.  I like it when I can pick up cards this way.  So much better than pumping out cash.
Posted by bamlinden at 2:35 PM