BEHIND THE MASKS - Some Trade Night Pickups

This past Thursday was the first trade night of the year.  With two monthly trade nights that I try to hit up as well as a local card show, I feel I'm pretty lucky to be able to go out and partake in these events as part of my hobby enjoyment.

I try to support these events because it gives me a chance to meet, discuss and pick up all things hockey and all things hobby.  For a number of years I've thought about the idea of not having these events to go to and it would be a very sad day should they no longer exist.

If there's a card show in your neck of the woods, be sure to spend some time at it (even if it's nothing more than window shopping).  And if there is a trade night at your local card shop, give it a try.  No harm in heading down with an open mind.

I'm heading into this year with a little more of a conscious attitude towards the money I spend on cards.  I'm going to try not to "splurge" on non-Linden items and really limit my impulse buying.

I did good my first week.

A card show on Saturday netted me nothing (but in all honesty I zipped through it as my nephew and I had other plans that day) and the trade night was not too much of a pocketbook dent.

In fact, I made a few trades.  Here are some of the results - goalie mask style. 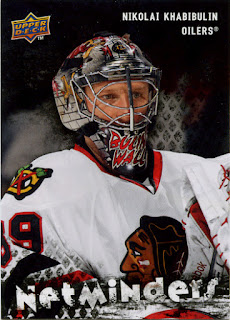 This is from an insert set released a few years ago.  I don't know if I consider it a true "mask" set as the photos just aren't close-up enough.

That said, I'll gladly pick up singles if they are a nice cheap price or, in this instance, acquired by trade.

"The Bulin Wall" has a pretty nice lid and this Black Hawks photo is one that accents it. 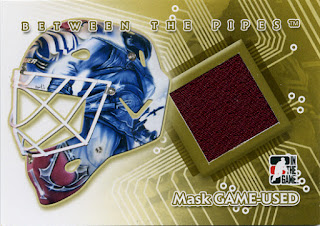 I don't normally pursue these mask/jersey pieces, but once again if a trade can be hashed out - I'll bite.

"Flanders" as he's nicknamed isn't too much of a hobby heavyweight so the asking price wasn't too bad.

It'll go in the goalie mask box with the other odds and sods.  Happy to pick another one up. 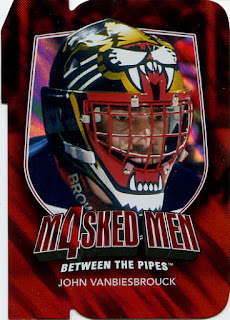 Lastly, this die-cut mask card of "The Beezer".  One of the most recognizable masks ever and definitely one of the most popular lids of the 90's.  It's clean design and unique look really looks cool - even after all these years.

I also like the wire cage.  It's a unique look in comparison to the other masks out there.  The red "more square" look in the frame really makes it instantly known.  That's his mask.

I've said it before, but the die-cut version being given to the base cards set is a real plus.  For those of you not in the know....there are silver and gold versions (each more limited in print runs) that are not die-cut.

A nice touch.
Posted by bamlinden at 3:21 PM