Tonight was the first night for a new crop of players to skate in their first official NHL game.  And while this group of rookies won't see themselves on cardboard until the 2013/14 season, it's almost assured that they will get their rookie card made before this guy... 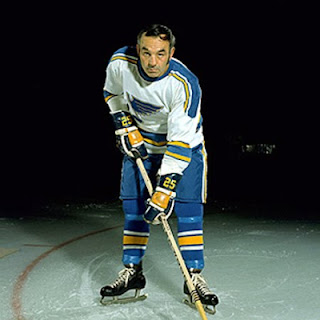 Connie Madigan.  This photo believe it or not was taken in his one and only season playing in the NHL.  He doesn't look like a rookie - in fact he looks more like a coach...or even general manager.  Boy times have changed.

But Connie does have a distinction that puts him into hockey history.

'DID YOU KNOW': In January 1973, Connie Madigan at the age of 38 years and 4 months became the oldest rookie in NHL history.

"Mad Dog" Madigan had a very strong minor league career, most notably with the Fort Wayne Komets and the Portland Buckaroos in the 1960's. 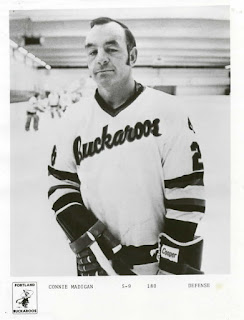 He was an 8-time All-Star and won best defenceman honors in 1966.  But he never got the chance to crack the NHL lineups.

In 1967, the NHL had its most notable (and important expansion) which gave many players the chance to break into the league.  During the 1972/73 season, the St. Louis Blues were hit with numerous injuries and ended up buying the rights to Madigan from the Buckaroos.

In January of 1973 he suited up for 20 regular season games as well as 5 in the playoffs.  Believe it or not, his coach (Jean-Guy Talbot) was just a mere 2 years older than him at the time.  It would be the only time he would see NHL ice.  The following season he was back with Portland and retired not long after. 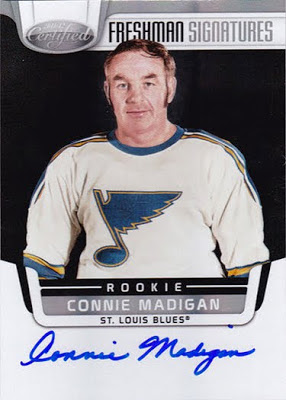 Connie's short stint in the NHL didn't garner him an NHL hockey card.  In fact, it would take until this 2011/12 Panini Certified Freshman Signatures auto card to be released that Madigan would be rewarded with a collectible.

To my knowledge, it's his one and only piece of cardboard officially issued. 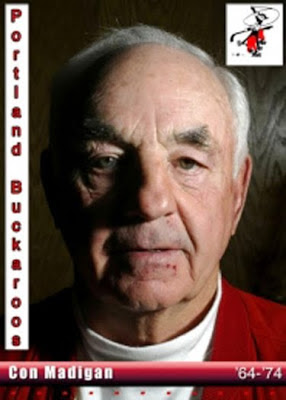 Currently, Connie still lives in Portland and was recently honored by the WHL's Winterhawks for his contribution to Portland hockey.

Oh, and just another tidbit.  He is also in the greatest hockey movie ever made - Slap Shot.  He plays legendary goon Ross "Mad Dog" Madison.

Now that's a pretty unique hockey career if you ask me.
Posted by bamlinden at 12:25 AM