Decided to do a little hockey card clean-up while I was watching the Flames game today.  My interest swayed more to the cards the further the game went.

Poor Flames.....and they think they can make the playoffs.

One of the things I was able to do was get a few of my 'One Sheet, One Set' pages in order.  I haven't updated it in a while and instead have been just filling box after box with cards that should be going into these pages.

It was a small dent, but a dent nonetheless that was made today and I thought I show off one of the new pages that caught my eye. This seems to be a pretty straight forward base set.  Consisting of 170 cards, it's not overly complex and not overly expensive.

What's odd (in doing some research) is that in addition to cards 1-170 there's a crop of 45 rookie cards.  This gives a complete set of 215.  Nothing weird about that.  But the card numbering has me fooled.

The one sheet has a nice uniform look to them with a blue colored theme throughout the base set.  Let's take a closer look at the design. 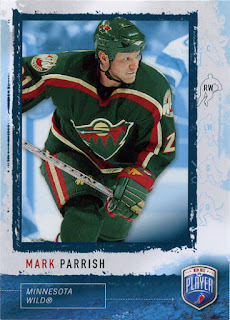 The front of the card has an off-centre photo frame taking up most of the card front.  The frame is a distressed look that reeks of some fancy Photoshop filter.  The photo used is nothing spectacular.  No real action photos and is a three-quarter body shot.  The player is cut out of the background and that background is then tinted blue and made a touch out of focus. This really makes the player punch out of the card nicely.

The non-blue colored jersey are really nice against this card design.  But there are too many cards where blue is the jersey color and that just makes it too blue for me.

Along the right side you can subtly see five position outlines with the shown player's position being emphasized.  While it is something unique, I think it is a bit unnecessary.  It feels like it was done just for the sake of doing something different rather than doing something better.

The player name appears below the photo and uses a very simple font.  It works for me though and so does the dual color.  What doesn't work is the team name at the bottom of the card.  Too simple and uninspired.  And where's the team logo.  This card would definitely benefit from one of those.

The BAP logo takes up the lower right corner and is a pretty sharp crest.  The various blue tones that make up the background base is not too bad.  Some textural elements give this card some solid finishing touches. 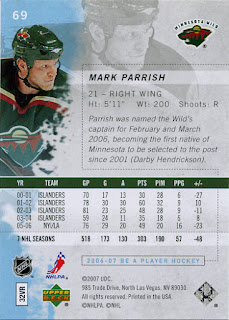 The back of the card is definitely the weakest part of the design element.  Gone is the contrasting blues and we are left with just a hint of light blue along the left side.

Notice as well the same photo used again.....AND AGAIN.  Waste of space in my opinion.  The team logo shows up in the top left and is really just hanging out by itself.  Again, uninspired.

The vitals and tidbit are nice, but take up too much space.  You know what that means....something else is compromised.  One of the two back photos could have been axed and the wording re-worked to fill the back a little more.

Only 5 years worth of stats.  Lame.  Not much else to say there.  I'm a big fan of complete stats.  This card back really makes me feel short-changed.

The bottom quarter of the card is brutal. Say for the product name (I really like that companies have implemented this on their cards.  Makes it a lot easier to identify what the heck I have.

But the logos and mice type take up way too much space.  A definite lack of identifying what's important, what empty and what is needed to present a solid back design.

Overall though it's a pretty nice looking set.  Thankfully we admire the fronts of the cards more than the back.

Again, the checklist isn't anything to write home about.  It's a base set.  The top card is Ovechkin (there's no Crosby) and next in line believe it or not is Joe Sakic.

This could be a bargain bin base set that sits in the $5-10 range.  Base cards like these (if you can find them...nobody wants them) can be had cheap.  Like I said, nothing complex at all.