Another nice addition to the Linden collection arrived recently and it comes from what was a very anticipated release (and insert set) but ended up being one of the bigger disappointments of the season.

Panini's recent 'Classics' product showcases some of the starts of yesteryear (I can't believe I just used that word) and I would have been shocked not to see my guy on the checklist.  After all, he's in some of their non-yesteryear sets (and in pretty strong numbers).

What I really like about 'Classics' is that there's a reasonable amount of cards to chase.  A base card, banner insert, base autograph and an insert auto.

Four cards - two are "throw-ins" when it comes to trades.  I like that.

While I'm still awaiting the base auto, the toughest (and most expensive) card hit the mailbox.  A cool concept if you ask me. 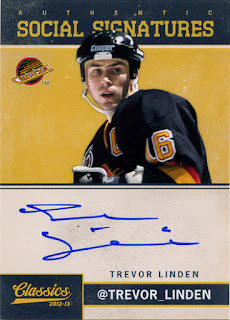 A cool concept....if the manufacturer and players would have seen it come to fruition.  Instead, this is nothing more than an autograph card.

It wasn't an overly expensive pickup and I knew that it was just a simple signature but boy could this card (and set) ever have been awesome.

I'm stumped as to why Panini wouldn't have the player write their twitter/facebook/whatever handle as part of their scribbling.  It would have been so much more impressive than having it typed on part of the card.

I guess that would have been asking too much.  You know there would have been one person who just couldn't complete the task.  As it is, there's a bunch of cards in the set that look this way.

But (if I'm not mistaken) there are a couple cards where the player actually writes his handle down.  Cool.

But unless all of the players do it in the set, it will just be a big missed opportunity.

Don't get me wrong....I like this card.  But it could have been so much more.

Maybe I should tweet Trevor about this.
Posted by bamlinden at 10:24 PM