With a new season comes a changing of the guard - literally.  It seems that there are some new residences for journeymen goalies, top prospect busts and those looking for that one last shot at glory.

What I love about goalies finding work in a new NHL city is that they immediately need to take care of the important things.  Most notably....a new paint job for the goalie mask.

What I've found odd is that while there are numerous resources for finding good quality mask pics, there aren't too many snapshots of these new (and impressive) lids.

But perseverance pays off in the end and I tracked down some photos of one of my faves this year. 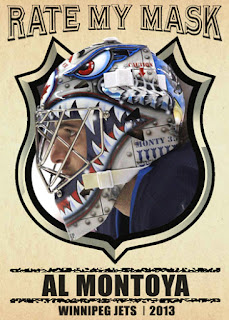 Al Montoya had a bit of a resurgence last year with the Islanders.  But a crammed goalie locker room made Montoya the odd man out.  New York's loss is Winnipeg's gain.

I think he'll fair well playing for the Jets.  I hope he can get about 10-20 starts in this shortened season, prove his worth as a solid "1a" to Pavelec and maybe do some damage next year when they play a full 82 games.

But on to his new look Jets mask. 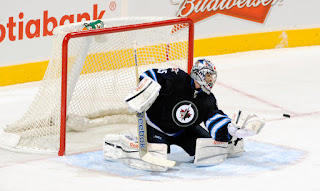 Known as the "Big Cubano", Montoya went with an Islander/sea motif with his previous club.  Staying with the "team theme" again this season, Al had a pretty aggressive looking cartoon jet take the main focus of his mask. 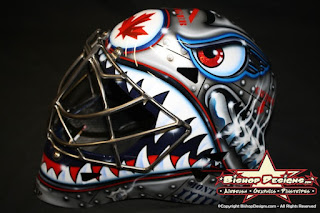 You can see the mouth and teeth completely envelop the cage of the mask (seems the thing to do these days).  The accentuated teeth really pop off the mask making it far more effective than some of the more subtle but scarier counterparts around the league.

Reminiscent of Brian Hayward's iconic San Jose Sharks mask of the 90's, Montoya's jet comes screaming out with smoking exhaust pipes coming out the side, a Jets logo on the forehead and a pair of very menacing eyes. 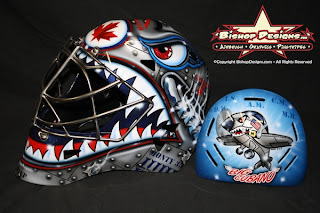 The backplate has Al's famous nickname as well as family initials surrounding a full shot of the fighter plane against a nice light blue.  This really contrasts the rest of the mask well. 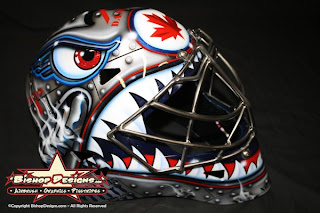 A closer look at the detail on the mask shows some smoking bullet holes in the chin area mixed in with the rivets on the metal plane "body".  The name "Monty 31" is also on the side of his mask (won't be confusing this with any of the other guys on the team, eh?) 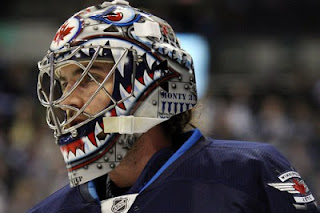 What I love most about Al Montoya's mask is that it is so recognizable - even from a far distance.  Too many masks these days are so intricate that you lose the effect unless you are right up close.  And I'm sure the pesky power forward from the other team could care less about the detail on a guy's mask.

Also, when the mask is being worn....the full effect of the mouth around the cage is seen.  Take a second look at the custom card I made for it.  It looks like Montoya's head is coming right out of the mask.  Very cool.

Hopefully Al gets to keep this mask for a little while.  He needs to find a home.

Now it's your turn to RATE MY MASK!
Posted by bamlinden at 1:36 PM