BEHIND THE MASK - Triplicity..... I Made A New Word

I was perusing my fellow bloggers sites over the past couple days and came across a neat post by Paul over at Card Boarded.

He started a new side project called 'Duplicity' and it showcases cards that use the same photo over more than one card product.

I think we've all seen some sort of example of that in the past, but to consciously pursue these cards to create a nice, inexpensive pc is pretty cool.

It's just another example of making the hobby fun while not having it break the bank.  Kudos!

Anyways, when I saw the post, I immediately thought of a trifecta of cards that would fit right in to the project.  It's of goalie Robert Esche when he first broke into the NHL. 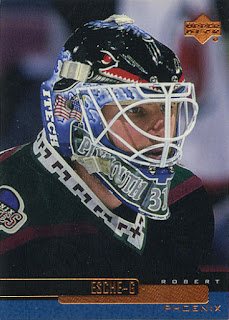 Drafted by Phoenix in 1996, Esche was on the verge of becoming a mainstay in the NHL when this photo was taken.  He had just 3 NHL games under his belt at the time.  Hence the Plymouth Whalers mask he's sporting.

Since I'm a big fan of goalie masks, I decided to keep it in my mask card box.  It was soon joined by another similar card. 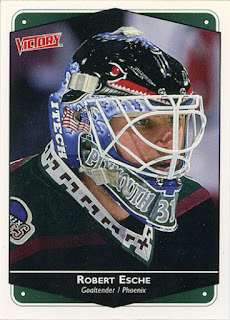 Upper Deck's low end Victory product utilizes the exact same Robert Esche photo.  And while I like the pic, I think it's a bit lame that UD had to resort to using the same photo twice. 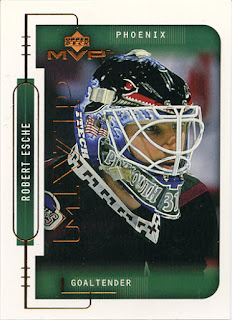 Make that three times.  It was another low end Upper Deck release - MVP - that creates this rare triple shot.

I understand that that there was probably a lack of Esche photos to be had at the time but one would think that there'd be at least one other pic.  In fact, on the back of the first Upper Deck card is a photo of Robert (showing off the other side of his mask) that would have worked just fine.

But I guess if that would have happened, this unique 'Triplicity' post would never have existed.

Keep up the great work Paul and I'm looking forward to seeing some more great doubles - literally.
Posted by bamlinden at 12:21 AM